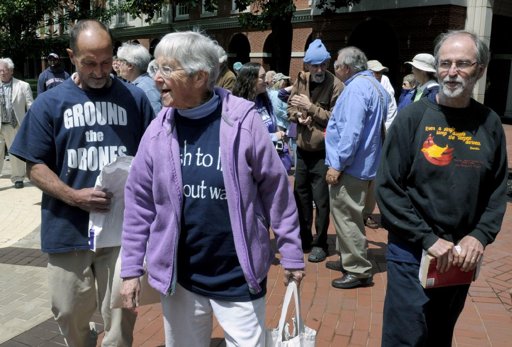 Last week, I posted about the 6th U.S. Circuit Court’s ruling (see below) that overturned the sabotage convictions of the “Y-12 Three” and ordered resentencing for their convictions on the charge of “injuring government property.” This created hope that “Transform Now Plowshares” members Sister Megan Rice, Michael Walli, and Greg Boertje-Obed would be released as a result, since their sentences were largely based on that higher charge of sabotage. On Saturday May 16th, those hopes were realized after the government stated that they would not fight their release:

On Friday, the government responded that it did not object to their release pending the July hearing, if the court ‘determines that the potential risk of the defendants over-serving their likely guideline sentences on their remaining convictions constitutes ‘exceptional reasons” under federal law.”

At this point, from everything I’ve heard it appears that they will be sentenced to time served on July 8th. Therefore, they will remain free, having already served more time than what is typical for the lesser crime for which their convictions were upheld:

The trio will still be re-sentenced on the lesser charges, but it could mean they are out of prison for good for the time already served. Quigley (their lawyer) says they are thrilled with the decision and still stand by their actions. On May 8th, an appeals court overturned the convictions of Sister Megan Rice, Greg Boertje-Obed and Michael Walli, members of the “Transform Now Plowshares” movement, on sabotage crimes relating to their acts of civil disobedience against nuclear war and in favor of peace. They also ordered that they be re-sentenced for a lesser crime of “injuring government property,” which was upheld.

Via the NY Times:

An anti-nuke nun may soon be blessed with freedom.

An appeals court has overturned the sabotage convictions of an 85-year-old nun and two fellow Catholic peace activists who broke into a weapons-grade uranium facility and splashed blood on the walls.

But Sister Megan Rice, locked up in the Metropolitan Detention Center in Brooklyn for the past two years, 66-year-old Michael Walli, and Greg Boertje-Obed, 59, are not totally in the clear yet.

A panel of the 6th U.S. Circuit Court of Appeals ruled in a 2-1 decision Friday that the three did not injure national security when they cut through several fences and broke into the Y-12 National Security Complex in Oak Ridge, Tenn., in July 2012.

But the court upheld a less serious conviction for injuring government property. “If a defendant blew up a building used to manufacture components for nuclear weapons . . . the government surely could demonstrate an adverse effect on the nation’s ability to attack or defend,” the opinion said. “But vague platitudes about a facility’s ‘crucial role in the national defense’ are not enough to convict a defendant of sabotage.”

The trio, known as the Y-12 three, hung banners, prayed and hammered on the outside wall of the bunker in Oak Ridge to symbolize a Bible passage that refers to the end of war: “They will beat their swords into ploughshares.”

Their aim was to bring the dangers of unimpeded nuclear proliferation to people’s attention.

The Appellate Court’s ruling determined that “Congress never intended to punish individuals whose sole intent was to spread a message of peace, which is far from trying to disrupt nuclear defense systems.”

The government had 14 days (as of May 8, 2015) to file an appeal to the U.S. Supreme Court in an attempt to have the convictions reinstated. I don’t have a lot of faith in the government in general or in their willingness to back down rather than fight to the bitter end to force compliance with their authority, but I have some personal reasons (read below for more on that) to hope they will, since I actually know Sister Meghan and consider her a friend.

Sister Meghan and the others convicted with her are nothing short of political prisoners, who (as the appeals court acknowledged) were given inflated charges based on the political messages they expressed with their protest and the defiance they displayed in the process, as well as the embarrassment the ease with which they carried it out caused to those tasked with guarding America’s war machines. They should be released immediately. Sister Megan Rice, a Catholic nun and long time member of the Catholic Worker movement, is one of the nicest, kindest, most soft-spoken people you would ever meet. She’s also one of the toughest and most morally grounded people you could ever be lucky enough to know. I first met her when she was living in Las Vegas and I was involved in helping to re-establish the local Food Not Bombs group here, back in late 2008. Sister Megan and other members of Las Vegas Catholic Worker were among those that had supported Food Not Bombs Las Vegas when the City of Las Vegas passed laws making it illegal to share food with hungry people, specifically with people who “a reasonable, ordinary person would believe” needed that food. Before that…Read the full post by clicking here.