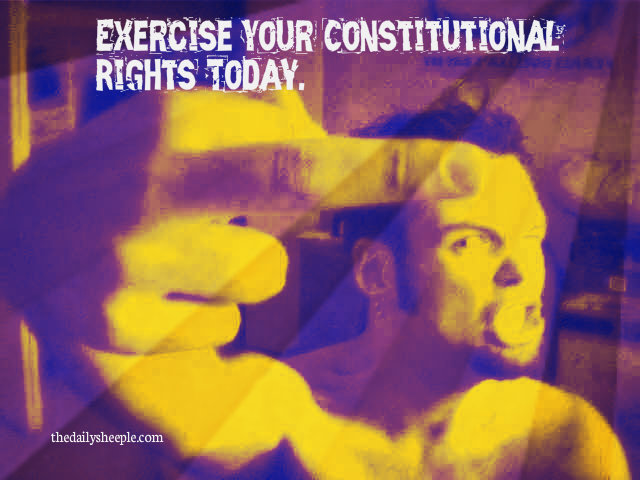 The video and text below (blockquote) was submitted to CopBlock.org by Z.L. via the Submission tab.

I was pulled over by Virginia State Trooper Highland after dropping my child off for school the morning of May 14, 2015. The trooper was running radar in front of the school and as I drove past him I gave him the middle finger. I observed the officer get into his cruiser and follow me into the school parking area. He waited in the parking area until I dropped of my child, and as I was departing, turned on his lights to pull me over. When he approached my vehicle, the first thing he said was “So, why you want to disrespect me like that.”

I informed the officer that unless he was detaining me for a lawful reason, he was breaking the law and informed him that I was recording him. He stated that a judge would find me guilty of disorderly conduct for flipping off an officer. I stated that it has been ruled that is not against the law to give an officer the middle finger. I stated that I have freedom of speech in the US and I can express that however I want. I stated that he was trying to embarrass me in front of my child’s school. He state that I was embarrassing myself. He then stated he wasn’t going to issue a summons. I asked if I was being detained and he stated no. I told the officer, if I was not being detained or arrested, to have a nice day then. I asked for his name and he provided it.

I was not pulled over, detained, or questioned for any other reason during this incident than giving the officer the middle finger as I drove past him. The trooper never asked for identification or vehicle registration. However, he did know my name, so he must have run my vehicle information to obtain that, as I never provided it verbally either. This incident took place in front of Madison Primary School, located in Madison VA 22727. I have filed a formal complaint with the VA state troopers Internal Affairs Office and I am contacting an attorney, as I believe that this is clearly an abuse of power and violation of my civil rights.

Even though Federal Courts have ruled, time and time again, that flipping off a cop is not a crime, we still have officers who react this way? Why is that? Seems to be nothing more than intimidation and to demand respect. What else could this Trooper have wanted, if he wasn’t going to issue a ticket, but just a warning? This is the second video this week posted here at CopBlock.org about a cop reacting poorly to someone giving him the finger.

Just a few days ago CopBlock.org’s own Adam Rupeka was maced, arrested and charged with disorderly conduct and resisting arrest after he flipped off Nate Baker of the Saratoga Police Department. Obviously this trooper handled this situation much better, yet, he was way off in his statements about what disorderly conduct means. I’m guessing he knew he was full of shit, because the trooper backed off pretty easily. This could have ended much like Adam’s case did, but gladly it didn’t.

So what do you say? Flipping off a cop, good or bad idea? Should the police give this any reaction whatsoever? Tell us in the comments below and if you plan on trying this, please, film it. Otherwise, you’ll probably be in a lot of danger.