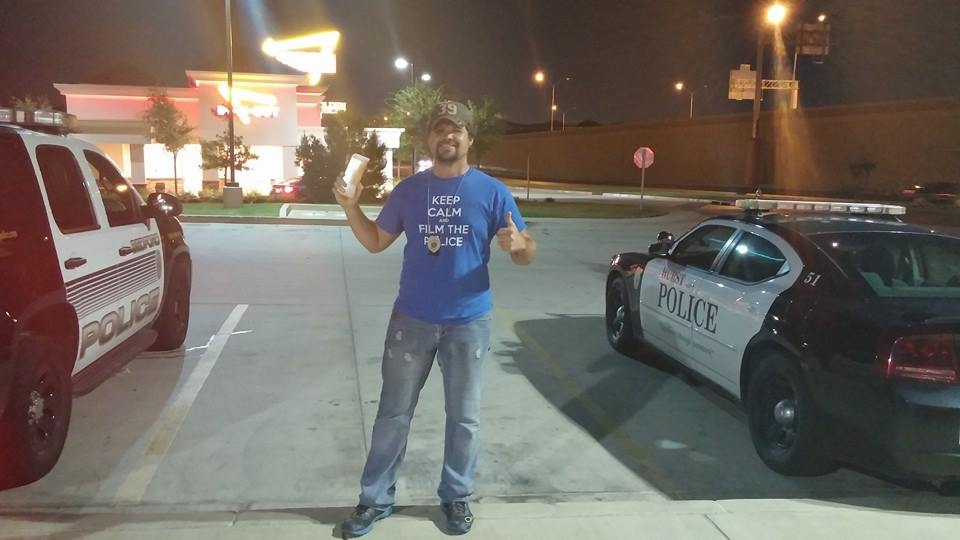 *THIS ARTICLE WAS ORIGINALLY PUBLISHED AT BRETTSANDERS.ME BY BRETT SANDERS*

LONE OAK TX – Kenny Lovett is being hailed a hero for his role in preventing a potentially deadly standoff between an armed man and his girlfriend late Wednesday evening.

Lovett, who made headlines when he was arrested in Arlington for carrying his black powder pistol while filming police, was sitting in his vehicle outside of the Lone Oak city hall prior to a special city council budget meeting when a woman and her boyfriend pulled up and parked along his drivers side window.  Lovett says that he heard what sounded like an argument between the couple and recalls hearing a barrage of profane language from the boyfriend directed at the female driver.  After the irate passenger observed Lovett watching the situation, he rolled up the van’s window to conceal his behavior.

As Lovett continued to monitor the situation he observed the man poking the woman’s forehead as he continued to berate her for unknown reasons.  Just a few minutes later, Lovett saw the man turn sideways in the passenger seat to presumably block Lovett’s view of the situation as he reached down to the floor board and grabbed what looked to be a handgun.  Lovett explained that he leaned forward to get a better view of the situation and was almost positive that the man was holding a gun to the woman’s head.  Soon after, the woman reportedly reversed out of the parking lot in a hurry, and Lovett followed.

“I knew deep down that he had pulled a gun, and I could see part of it.  I knew what he was doing.  She threw it in reverse and took off and I noticed the plate was from Oklahoma and at that point, I knew something wasn’t right.

As Lovett followed the vehicle, he alerted, via radio, his friend and fellow cop watcher, Kory Watkins ,who was in attendance at a council meeting with Lone Oak Police Chief, Jessie Smallwood.  Watkins immediately informed the Chief, who alerted local authorities of the situation.

Lovett decided to circle back to city hall to meet up with the Chief before heading out again to help search for the armed assailant.  After several minutes passed, the Chief alerted Lovett that an environmental enforcement officer had pulled the van over south of town on county road 1571, which dead ends at Lake Tawakoni.  When Lovett arrived on the scene, the suspect, who according to police is a convicted murderer and fresh out of prison, was apprehended without incident.  The man was allegedly intoxicated and possessed a loaded pistol with 17 additional rounds on his person.  Authorities believe that there was a good possibility that the suspect would have killed the woman if not apprehended.

Watkins was able to capture some video of the police convoy after the arrest, which shows Lovett bringing up the rear.

They were like right on it, and that’s fighting real crime and that’s what I support.

This morning, Lovett sat down at the Lone Oak Police station and gave a statement regarding the events that transpired last night.  He said as he entered the building, admin staff greeted him with a standing ovation.  Twyla Parker, the court clerk has even nominated Lovett for the Citizen of the Year award.

I would like to nominate Kenny Lovett for the citizen of the year award!!! If not for him the story in today’s headlines would have read VERY differently!! Thanks for getting involved Kenny!!

Cop watchers are often portrayed in the media or by police organizations as being a threat to police, but in general most cop watchers are just concerned community members who are providing a service to their fellow citizens by documenting an objective record of police interactions.  Instances where cop watchers help stranded motorists push their vehicles to safety, or help change a flat tire or jump start their vehicles go largely unreported.

Cop watchers largely support police who are fighting crime and protecting life, liberty, and property.  However, the cop watch movement has gained traction in recent years as a result of a corrupt political class passing laws which make peaceful, non-violent citizens a target of police and often lead to their rights being violated by an officer who is “just doing their job.”

On the same note, Lovett is an example of how a cop watcher is willing and able to work along side police to help protect citizens from a legitimate criminal element.