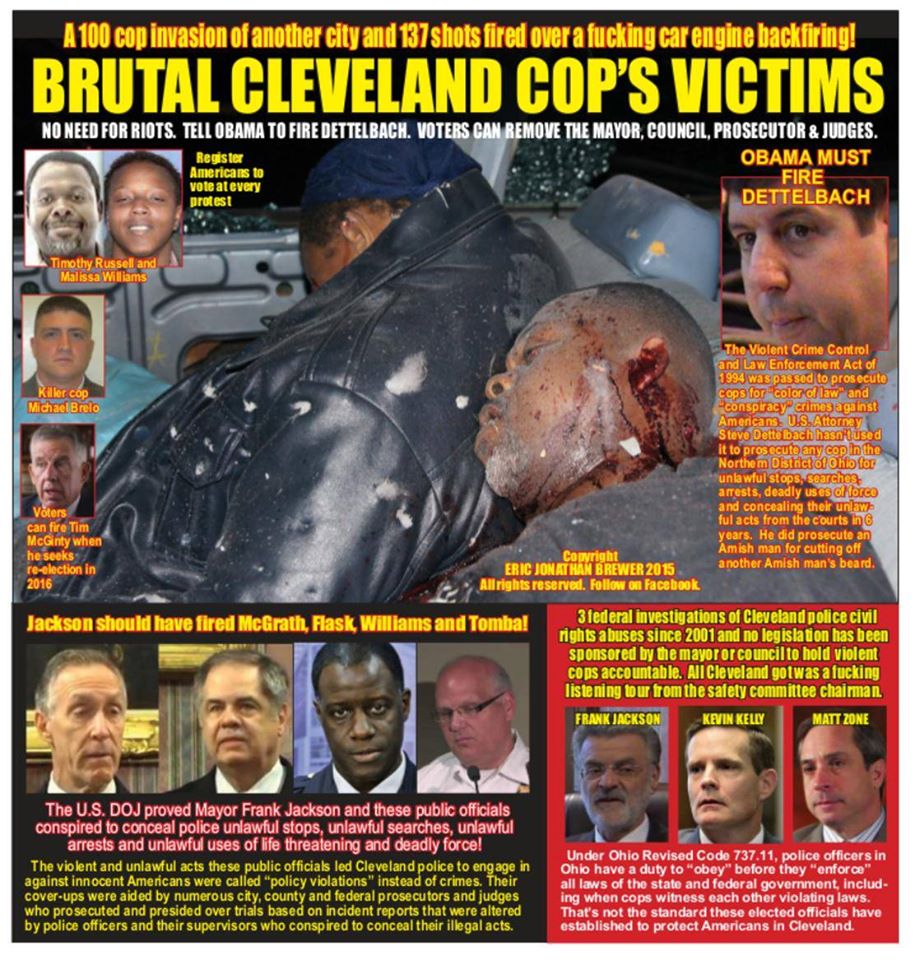 This photo along with this description was found on Facebook. Posted by former East Cleveland Mayor, Eric Jonathan Brewer. This brutal picture of Timothy Russell’s and Malissa Williams’ bullet riddled bodies hasn’t been published or broadcast by any news media outlet in the world. It reveals killer Cleveland cop Michael Brelo’s vicious act of cowardice as he stood on the hood of Russell’s car and fired 3 clips of 40 caliber bullets into their unarmed bodies. He wasn’t in terror because of anything they did. They were the victims of the terror he and over 100 out-of-control Cleveland cops operating like a lynch mob inflicted on them.

What you don’t see is the bullet hole in Malissa’s eye. You can see the hole in Timothy’s ear. Brelo and the other cops fired more than 20 bullets into each of Timothy and Malissa’s unarmed bodies. This was a vicious act of law enforcement savagery that should not be hidden from public view. Never forget that Cuyahoga County Prosecutor Timothy McGinty, a police union endorsed Democratic Irish Catholic politician, knew over 100 Cleveland cops committed crimes when they invaded East Cleveland, and he only criminally-charged one. This is not justice.

I’ve added pictures of the elected and appointed officials who I believe should be held accountable for the brutal violence that Cleveland cops have inflicted on hundreds and thousands of Clevelanders and visitors over the years. Their careers in elected or appointed government offices should be over as voters should never trust them again.

I firmly believe the U.S. Department of Justice investigations of police violations of law should start at the top and target the mayors, who serve as chief law enforcement officers, for indictment and prosecution for failing to supervise constitutional compliance into the police departments they oversee. That won’t happen under President Barack Obama’s appointee, Steve Dettelbach, who has failed to conduct a single investigation of any northern Ohio police department during his six years as the U.S. Attorney for the state’s northern district. He did, however prosecute one Amish man for cutting off the beard of another Amish man.

Mayor Frank Jackson appointed every single official who supervises Brelo and the other Cleveland cops who the U.S. Department of Justice identified as having committed thousands of unlawful stops, unlawful searches, unlawful arrests, unlawful uses of force, and who conspired to conceal their unlawful acts in police incident reports used by prosecutors and judges to convict innocent Americans. Despite the fact that Jackson now knows police incident reports contain “concealed” unlawful acts committed by cops under his daily administrative oversight, he has failed to order a review of prosecutions connected to those reports to protect the rights of the Americans they harmed.

The Cleveland City Council, particularly Council President Kevin Kelly and Safety Committee Chairman Matt Zone, have failed to conduct a council investigation of the constitutional and lawbreaking abuses the U.S. Department of Justice revealed in its investigation of the city’s police department. Neither of these two so-called legislative leaders have written ordinances that not only limit police interactions with citizens, but that also provide clear instructions on how lawbreaking cops shall be investigated and punished for their criminal violations of law.

What this council and state lawmakers continue to do is enact laws that create profit-driven encounters between cops and citizens. Window tint, seat belt, driving without insurance, lane changing, turn signal, loitering … all these laws have no victims other than “the city,” and they have nothing to do with solving murders, rapes, robberies, missing persons and other crimes against people. Timothy and Malissa were murdered because a cop heard his engine backfire and then used his wild and paranoid imagination to believe that someone was shooting at him. Michael Brown was murdered because he was walking in the street. Eric Garner over cigarettes he was accused of selling. All petty offenses that come from laws enacted by councils, whose members were only thinking about money.

There is no law anywhere, state or federal, that authorizes Mayor Frank Jackson, Executive Assistant Martin Flask, Safety Director Michael McGrath, Chief of Police Calvin Williams and Deputy Chief Edward Tomba to convert cop crimes into “administrative offenses.” Cops who violate laws are supposed to be arrested by other cops, charged by city prosecutors, and prosecuted just like any other lawbreaking American citizens.

So instead of rioting and protesting, it’s been my belief as a former mayor that Americans should target the responsible elected officials for not only removal from office, but also prosecution. At the very least, Mayor Frank Jackson and his team should be prosecuted for dereliction of duty, obstruction of official business, violation of rights under the color of law, and conspiracy to violate rights under the color of law.

I believe there should be voter registration drives and recall petitions circulated at every protest. Instead of leaving the mayors, councils, prosecutors and judges in office who are turning a blind eye to police lawbreaking, American citizens should launch initiatives to enact new “police accountability” local laws that reflect the will of the American people to see lawbreaking cops indicted, prosecuted, convicted and jailed just like the citizens they arrest. Forget political party loyalty. Most African Americans live in Democratic controlled cities and counties. Neither Democrats nor Republicans have offered Americans any relief from the vicious acts of cops who have less than 600 hours of training across the nation. Think about it. Barbers and cosmetologists in Ohio must have 1500 hours of training.

The residents of Ferguson, Missouri wasted a lot of energy protesting and rioting when they could have collected 550 signatures to recall and replace the mayor and members of council less than 90 days after Michael Brown was murdered by killer cop Darren Wilson. They’d have been removed from office before the idiot St.Louis County prosecutor decided not to prosecute Wilson. Too bad U.S. Rep. William Clay, Jr. did nothing to empower the Ferguson residents he served to pursue recalls and local ordinance reforms.

In my opinion, there’s no need to tear up our neighborhoods when Americans can easily flood the voting booths and tear up the careers of the politicians who’ve done nothing about police violations of their constitutional rights and laws.

If Mayor Frank Jackson, Kelley, Zone and other mayors and council members across the United States of America are failing to protect the Americans they serve from unlawful police encounters, why should they be allowed to remain in office and retire so taxpayers can continue to pay their benefits and pensions?

Please spread the word. Riot at the polls, not in the streets.