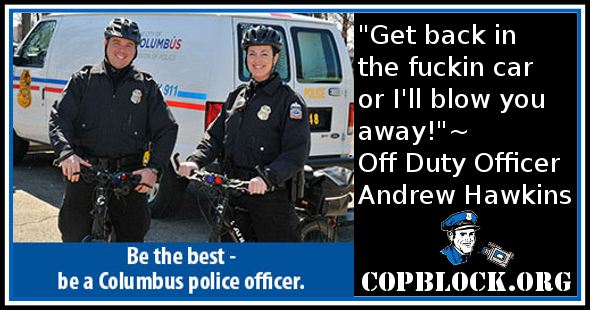 A Columbus Police Department officer is in trouble. This is what I’ve come to expect from police officers these days. Anthony Smallwood and a friend were in a parking lot in Lancaster Ohio. As they tried to get out of their car, they bumped the car next to them with the car door. The woman in the car told them to be careful, they apologized and that was the end of it right? WRONG!

CPD Officer Andrew Hawkins didn’t feel that was good enough. As Smallwood and his companion left the parking lot, Hawkins came barrel-assin at them, head on! Scared, Smallwood stopped his car due to the risk of being hit by Hawkins truck, which was speeding at him.

“And a white Tundra pulls out of nowhere and comes at us head on and I just stopped because, I’m like, ‘Is this guy about to hit me head on or something?’” Smallwood said. “He comes at me, very aggressively, he says ‘Get out of the car, hit and run!’” he said.

“[He] puts me up against the car, put my hands behind my back, then [he] starts shoving me in the mirror and shoving my face down and everything,” he said.

As Smallwoods friend attempts to get out of the car to see what’s going on, he is met by Hawkins verbal threat, “Get back in fuckin car, or Ill blow you away!” Obviously the attitude of someone who feels his badge grants him extra rights. A witness who called 911 is backing up Smallwoods claims.

“The cop more or less chased him down in his personal vehicle and now he’s got them detained,” the witness told police. “You guys have got to get here, quick. It’s a crazy situation out here.”

Hawkins was charged with eight counts, including aggravated menacing and unlawful restraint Wednesday. He pleaded not guilty, which Smallwood can’t believe.

“It’s not right,” Smallwood said. “It’s not a good-hearted person. If you’re supposed to protect the people, then what are you doing?”

Columbus Police say Hawkins’ badge and gun have been removed and he is now on desk duty until the outcome of this criminal case.

He is now on desk duty, but still collecting a paycheck! Ain’t that a bitch! What would happen to you, me, or Mr Smallwood if we tried to pull some bush-league shit like this? Would we be allowed to keep our jobs, having violated someones rights like that? He has been stripped of his gun, which is probably the most important thing to come out of this. This man obviously doesn’t deserve to wear a badge or carry a gun! It’s just a matter of time before someone with this temperament hurts or kills someone!

Officer Hawkins pleaded not guilty. A plea that surprised Anthony Smallwood. I guess we will have to wait and continue to pay this lunatic until the court decides what to do with him. How do you feel that you are still paying this man Columbus? Thankfully there is a CopBlock Chapter in Columbus!