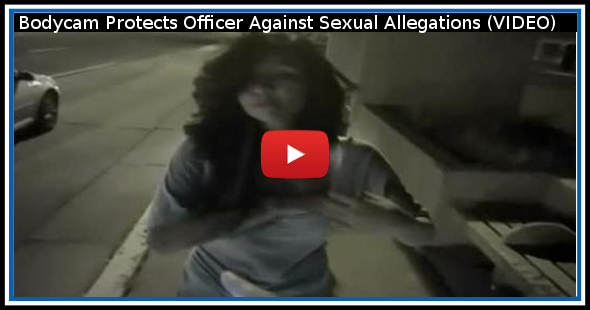 Falsely accusing others of a crime is never okay. It is exactly that sort of behavior that erodes human trust and helps to feed the growing police state. In the video above, the body cam worn by the officer protects him against allegations of sexual wrong doing.

The young woman in the video attempts to set the officer up by using her phone to record an audio only performance meant to make it appear as though he was acting inappropriately. She was attempting to ‘flip the script’. What she failed to realize is that the entire thing, including her devious performance, were recorded.

Many officials who argue for body cams being worn by LEO’s often cite scenarios such as this one, where documentation actually protects cops of false accusations. Opponents of these technological artifacts argue that it further erodes our already dwindling privacy in a world of Big Surveillance. Both are true. However, accountability is becoming a major part of our reputation based society. With it we will likely lose some forms of privacy, while gaining others. It cannot be denied that when used properly, body cams help protect all involved.

Of course, one camera is never enough. While the police are filming you, you should also be filming them. And hopefully somebody is filming both of you film one another. Then, if and when things go wrong…