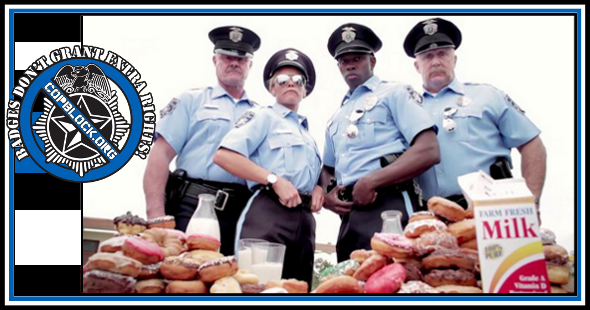 You may find it quite amusing to learn that just before I began writing for CopBlock.org, I spent two years working at a popular local independent donut shop. I did not leave that job to do this. I left it because the hours were incompatible with my sanity and well-being. As a consequence, however, I often hear the donut cliche come up and I always find myself wincing as I explain that the cops and bear claws myth is out of date.

In over two years, I only ever had two regular LEO’s as customers. One of these was a woman who was part of the Community Service branch that actually often do useful and helpful things, like unlocking your car when you bone-headedly left the keys locked within it. As a customer, she was often very quiet and reserved. She was kind, but trepidatious about wearing that uniform in the donut shop. So I never got to speak with her much. However, she sometimes brought in her young daughter who seriously loved some sprinkles, which appeared to be why she broke the no-donut taboo.

The other officer, who I regularly saw there, was a younger guy that would come very early in the morning at the end of his shift. He was always very casual and polite. One morning he showed up in civvies and I was surprised to see him wearing a vintage SubPop t-shirt. After that, he and I would talk music. We would also sometimes discuss policing. He didn’t seem to enjoy his job much and was always talking about finding something different. At some point he stopped coming in. I hope he found that better career he was looking for.

Every once in awhile an officer would come in, but they were always very stern, distant and out-of-place. You could almost palatably feel their discomfort as eyes around them swirled with inner monologues containing stereotypes and jokes. This did not happen often, though.

If you are thinking that perhaps location was a factor, the donut shop was attached to a gas station that the city has a an account with for fuel and car washes for their cruisers. Police were several times daily within just feet of our door. It would have been an incredibly convenient place for them to grab a snack, but instead they avoided being seen in our business.

At one point, the business had even offered to donate the days unsold donuts to the police and fire departments, both of whom declined, citing a charity regulation as the reason. It was always made abundantly clear that cops didn’t want anything to do with us or with donuts.

Police have changed a lot since that stereotype was created. Modern law enforcement is full of young urban professionals who prefer fitness and finer things to donuts. Step into a Starbucks or any other yuppie coffee place and you will see cops buying macchiatos and biscotti on the way to the gym after work. Narcissism has replaced laziness as an accurate stereotype for police. How cops appear has become very important to them. The soldier image has replaced the mustachioed frumpy guy who looks like your uncle. And the status symbols and consumer goods have evolved beyond donuts and other working class associated items, having been replaced with products and services that uphold an image of cops as slick professionals.

There is a potent metaphor for the evolution of the police state in all of this, but I will not belabor it with a detailed analysis. We were much better off when police were human beings who were not first and foremost concerned with their cop image.

Maybe we can lure them back to some semblance of humanity with donuts. Here is an experiment. Go buy a dozen and take them to your local police station. Be kind and sincere in extending the gift. Using a sharpie write the following on the box:
www.copblock.org/welcomeleos/

…then, send us your story.