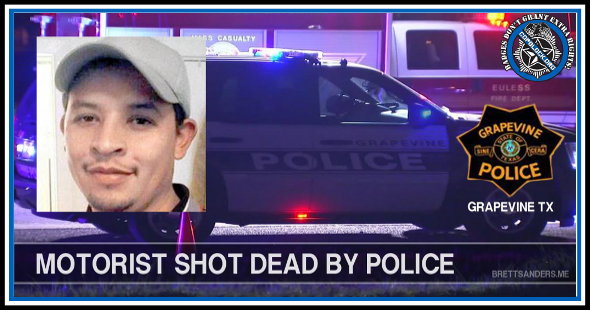 Eddie Salame, chief of Grapevine, TX police, is seen in the video below giving a step by step account of the encounter between Grapevine police officer Robert Clark and Rubén García Villalpando. I’m surprised to see such a video released by a police department providing such a look into their reasonings behind this officer involved shooting.

I can’t recall this ever being done before, but I’m glad to see police providing their perspective of the events that transpired. Many people say it’s easy to “Monday Morning Quarterback” a video, but I think openly discussing what took place may just help the next officer who may find themselves in a similar situation. As you familiarize yourself with the story and watch Salame’s video, ask yourself, “Did Rubén have to be shot? Could anything else have been done?”

This story was first covered at CopBlock.org by Kory Watkins, of Texas CopBlock, (on Feb 26th, 2015) who stated:

Police ordered Garcia be taken to John Peter Smith Hospital, while other hospitals were closer in proximity. Investigators were checking whether he was stopped in connection with a report of a possible burglary. But the officer indicated clearly before the shooting that he had determined the burglary call was a false alarm. So that had nothing to do with Ruben and the officer knew that. Grapevine police are reviewing dash-cam video and interviewing witnesses to determine what led the officer to shoot Ruben twice in the chest during a traffic stop on State Highway 121 in Euless. The only video you can see as of now is one taken by a person who was driving by.  Grapevine police are reporting that Ruben had his hands in the air right before he was shot.

The other video is a dash camera from inside the officer’s car, which has not yet been released to the public. Over the years that I have been a activist the one thing I know is when police are in the right, they show the video immediately, when they are in wrong, they keep the video from being shown, just like they are doing here. Police are public servants and that is public video. We want to see what happened and NOW! We want the video raw and uncut. Domingo Garcia who is representing the family in this case, had this to say about the situation.

“Ruben Garcia was stopped by grapevine police officer Robert Clark, despite being unarmed and with his hands in the air ,he was shot and killed. It’s all on video including the officer using a host of profanities against him before shooting twice at point blank range. This is much worse than Ferguson, today his widow Martha and her four children, the oldest 10, are asking for justice and for the officer to held accountable.”

Officer Clark has been put on administrative leave, also known as paid vacation, until further notice. In response to the police shooting and subsequent suppression of the dash cam video a rally has been planned. People are starting to see past the divide and conquer game the media and others play to keep people separate so it’s easier to rule them.

The video below was published on May 18th, 2015, nearly 3 months after the shooting took place. Will Kory’s prediction based off his personal experience prove correct? Did Robert Clark pull the trigger on a man who was not a threat to him? Watch the video below to hear the ‘official police story.’

Salame clearly sets the stage that Villalpando was shot by Clark because he was ‘not responsive to his demands’ to stop proceeding towards the officer. Even saying that, “it would only take seconds for him to change the position of his hands, if he comes close enough to attack the officer.” Adding that at the time Clark fired his weapon Villalpando had been asked 20 times to stop his approach. All of this is factual, and can be verified in the video, but does this really justify killing Villalpando?

The video also shows some other facts, like, Villalpando was walking slowly, spinning around and for the most part had his hands in the air or on his head. His advancements on Clark were extremely slow and he didn’t show a threatening demeanor at all while on video. Of course, the video included a nice little quote from Former FBI agent Patrick claiming that Villalpando’s demeanor was that of a person who was planning an attack, but he has to say that. He’s a cop investigating a cop, or it’s pure speculation, either way people shouldn’t be shot for what another person thinks they might do and that’s the BS they’re selling here.

Of course, people are expecting me to say this officer committed murder, he should be held accountable and promote some sort of local event or call flood. Some of which I might in fact do, or assist with, but for this piece I want to answer the questions I asked to start this blog. Did Rubén have to be shot and could anything else have been done? My answers are, “no”, Rubén shouldn’t have been shot and “yes” officers should be trained to take more steps before pulling the trigger on unarmed suspects. Here’s why I feel this way.

Villalpando most certainly had no weapon, therefore, the only threat he could have possibly presented was his own body (hands and feet; punches and kicks). Why in the world did Clark decidd it would be best to shoot this man (twice) as opposed to merely backing up one step for every step he took towards him? His backup was enroute and Villalpando wasn’t an immediate danger, so long as the officer could keep some distance between them. Why stand your ground? This is a huge flaw in the training of police officers today, not only are they trained to think everyone is Chuck Norris and could kill them with a throat punch, but they’re also trained to continue pursuits and maintain positions.

Why is it so rare that cops call off a chase or back up their position themselves? Why would they even want to put themselves in a position to have to shoot someone. I would much rather take a few steps back while trying to further assess a situation, if that means I wouldn’t have to kill someone. Honestly, would Rubén be dead today, if Clark would have taken a car lengths worth of steps back with him? And if the reason he didn’t is due to training, then officers need to open their eyes and see the dangers their current training is putting them into. You don’t have to chase down every person who runs from you, you don’t have to pepper spray people who flip you off and you most certainly shouldn’t be shooting guys who stumble towards you as your main reason. Enough is enough.