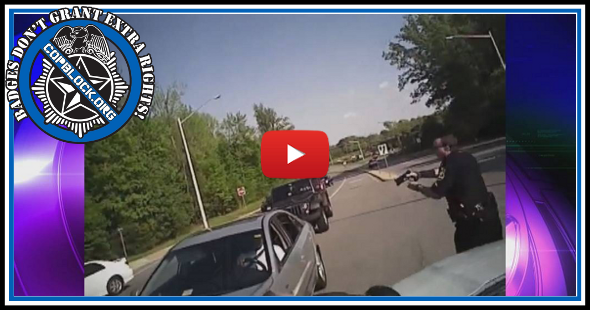 Body-cam footage has emerged showing a Virginia police officer deploying a Taser and pepper spray on an unresponsive man having a stroke, accused of wrecking his vehicle earlier this month.

Police say 34-year-old David Washington was driving a silver Hyundai on Jefferson Davis Highway in Fredericksburg, where he ran over the median and struck a Jeep on May 4.

The Hyundai stopped at the intersection of Cowan Boulevard and Powhatan Street, police say, where the driver of the Jeep and a witness remained on scene until Fredericksburg police arrived.

Moments later, Officer Shaun Jurgens arrives on the scene and deploys his taser on a still unresponsive Washington. One of the Taser prongs however, did not hit the man, police say, making it ineffective.

The footage then shows Jurgens pepper spray Washington in the face and remove him from his car with the help of another officer.

Washington was charged with” hit and run with property damage, reckless driving, and driving on a revoked or suspended license.”

He was transported to Mary Washington Hospital by ambulance, where it was discovered that he had suffered a stroke some hours earlier.

An internal investigation was launched in the following weeks of the incident that determined Officer Jurgens’ use of force was unnecessary and inappropriate.

“The use of force demonstrated in the incident involving Mr. Washington was not in compliance with department policy or training,” Fredericksburg Police Captain Rick Pennock said.

“We take matters such as these very seriously and require that officers at all times exercise appropriate restraint and good judgment in their dealings with citizens.”

Jurgens resigned amid the wake of the investigation on May 14.