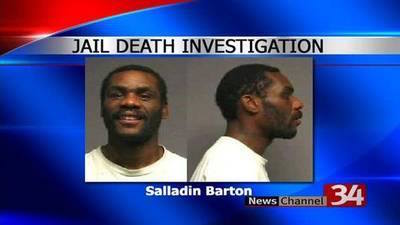 Salladin Barton was a well liked local who died in January 2015 while in jail on several non-violent charges. Information provided by fellow inmates seems to corroborate the families concerns that his death did not occur as reported by jail officials. According to WBNG12:

Salladin Barton, 35, was severely beaten by at least two jail employees on January 14, the lawsuit said, and he died the following day: January 15.

The temporary administrator on his estate…claims jail employees harassed Barton, who was awaiting trial, for being an African American, calling him racial slurs, beating him and denying him food.

Barton suffered from a mental illness and had physical ailments that required medical treatment, which the lawsuit said he was denied.

Jail employees would place food near his cell, but out of reach, and then come by and throw it in the garbage. Other inmates would share their food to keep him from starving.

In addition to preventing him from eating, corrections officers threatened Barton’s family and took off all his clothes – leaving him naked in his cell.

The abuse, agitated Barton’s mental illness, causing him to bang his head against cell bars and break out in seizures.

The jailers, and initially even the mans lawyer, claimed that his death was the result of a drug overdose. However, three toxicology reports have failed to show any drugs in his system when he died. Salladin’s family had visited him earlier that day and said that he seemed to be in good spirits, a sentiment shared by his fellow inmates when later questioned. He had made a phone to call regarding his legal case just twenty minutes before he was found dead in his cell. Barton had spoken to his attorney Ron Benjamin the day before his death about allegations of abuse Benjamin had received in a letter from a fellow inmate.

“This is the first time in my 35 years that I received a letter from an inmate writing on behalf of another inmate,” Benjamin said.

Broome County Sheriff David Harder and county jail administrator Mark Smolinsky have been named as defendants in the lawsuit filed by Barton’s family and estate. Benjamin claims that the two were at least partially aware of the treatment Salladin received while in their facility.

You can reach out to his friends and family and stay informed about his case at the Facebook page- Justice for Salladin Barton.