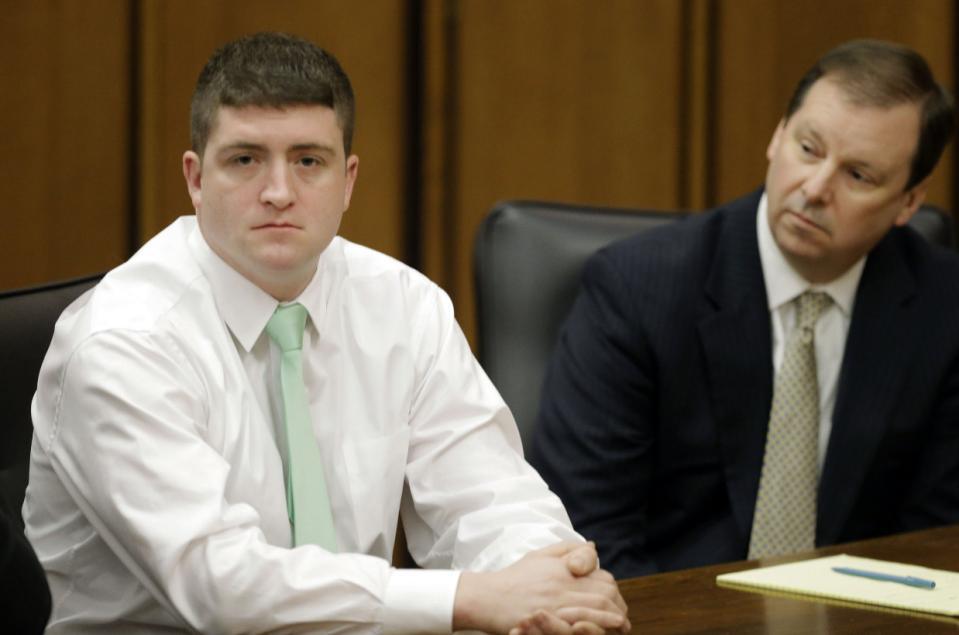 Michael Brelo jumped on the hood of a car after a high speed chase through the streets of Cleveland and fired 15 times. This brought the total amount of shots fired on the vehicle to 137. Yes, police fired one hundred and thirty-seven times at Timothy Russell and Malissa Williams; the occupants of the vehicle. Today, nearly 2.5 years later, Cuyahoga Common Pleas Judge John P. O’Donnell just found Michael Brelo NOT GUILTY on all charges.

“I Don’t Recall That, Sir.” Testifies Ohio Cop Who Fired 15 Rounds Into Car While Standing On the Hood:

It’s obvious that more than just Brelo overreacted here, but I guess the problem is training since – according to the same article, “the U.S. Justice Department probe that concluded Cleveland police officers have shown a pattern and practice of using excessive force. The city and federal authorities are negotiating a consent decree to reform the police department that will cost the city millions of dollars to implement and enforce. Cleveland has already paid $3 million to the families of Russell and Williams to settle a lawsuit.” The conclusion that police use excessive force is laughable because all police use excessive force. If you ask me, a man in a jacked up cruiser, with flashing lights, speeding down the road after you, while armed and with a shiny badge because you sped by him, is pretty excessive.

I believe that the only outcome of this is that taxpayers will give a clearly inadequate police force millions of dollars (more) and officers will use this merely as a, “Don’t mess up like Brelo” example. Yet, the police will continue to kill, like they did when they shot Tamir Rice – a 12 year old boy, and use excessive force because, simply put, that’s what they do.

This brutal picture of Timothy Russell’s and Malissa Williams’ bullet riddled bodies hasn’t been published or broadcast by any news media outlet in the world. It reveals killer Cleveland cop Michael Brelo’s vicious act of cowardice as he stood on the hood of Russell’s car and fired 3 clips of 40 caliber bullets into their unarmed bodies. He wasn’t in terror because of anything they did. They were the victims of the terror he and over 100 out-of-control Cleveland cops operating like a lynch mob inflicted on them.

What you don’t see is the bullet hole in Malissa’s eye. You can see the hole in Timothy’s ear. Brelo and the other cops fired more than 20 bullets into each of Timothy and Malissa’s unarmed bodies. This was a vicious act of law enforcement savagery that should not be hidden from public view. Never forget that Cuyahoga County Prosecutor Timothy McGinty, a police union endorsed Democratic Irish Catholic politician, knew over 100 Cleveland cops committed crimes when they invaded East Cleveland, and he only criminally-charged one. This is not justice.

STAY TUNED FOR MORE ABOUT THIS VERDICT HERE AT COPBLOCK.ORG.