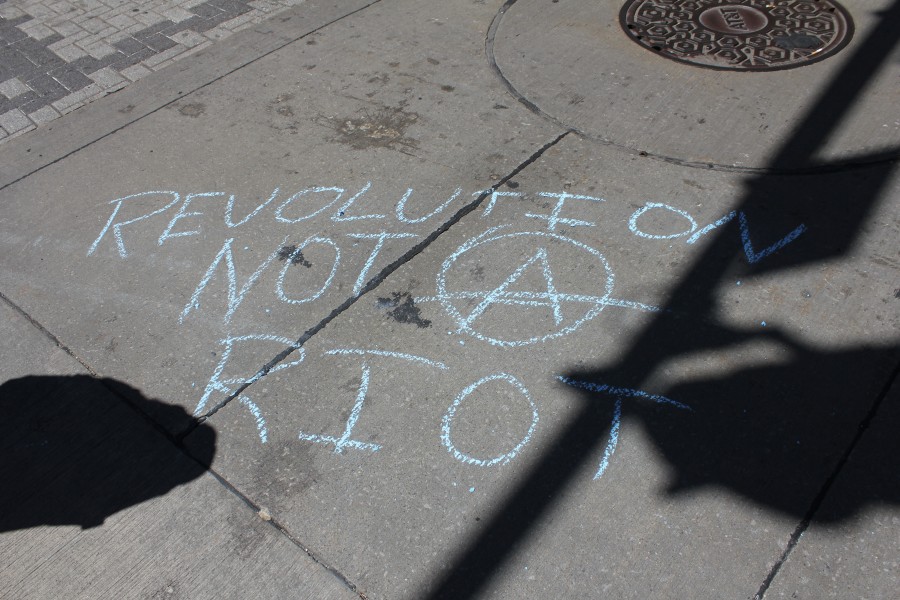 Yesterday Deo, Tom, Jason and myself spent the day in downtown Cleveland after the not guilty verdict was officially rendered in the Michael Brelo case. For those unfamiliar with Brelo’s case, click here. The video below is a summary of yesterday’s Brelo Protest from the marching around town to the arrest of 71 protestors by Cleveland Riot Police.

The four of us were getting food and charging our batteries when the skirmish broke out on 4th street – see video here – but we were present for the entire protest otherwise. During the nearly 10 hours of protesting and marching there were probably only 4 times, that I saw, where individuals needed to be reminded to respect private property or to refrain from violent acts. As seen in the video above the people marching had no intentions of damaging property or being arrested – at one point I recall walking by a Lexus with it’s top down, nobody so much as looked at it. Those who were talked to, or heard the crowds reaction to their actions, corrected their behavior promptly and voluntarily, without force. Outside of these small and rare instances the sole focus was on spreading the message that that justice was not served today.

The police were also well behaved for the most part, especially during the long march to link up with Tamir Rice protesters, yet, a few of them did show their true colors. Why the two police motorcycle cops would use their bikes as weapons, by revving them in people’s faces, is beyond me. I was completely shocked when I witnessed that and you can’t tell from the video but I was yelling, “What the hell is wrong with you? Look what you’re doing!” Officer 901 was looking right at me so he had to have known I was not happy with his actions but he just kept on doing it. Then later when police came without warning to snatch the sign thrower (mislabeled in my video as the man who threw a rock, as that was the story at the time) they came at him like WWE wrestlers, so, from other protesters perspectives it seemed like the cop was snatching him up for no reason. I noted that the protestors were willing to not only police themselves but go out of their way to not be arrested or have any police interactions. Why didn’t the police do the same? Why didn’t they either wait until after the protest to arrest the guy OR simply state that the man had harmed another when he threw the sign into the business and needed to go with them. Again, I was with the crowd – socialized with many of them – and I personally feel that the protesters would have agreed to walking that man out. Police also should have removed at least three cops from the event that day. I recall seeing one nearly the entire time and he’s the man that smacked my camera (he’s also seen in the alley footage I have too). This man slapped a few cameras and seems to like to push people. Same with one horseback cop (white horse) who likes to nearly run people over with his horse.

In the little over an hour that we choose to grab a bite and charge our batteries it seemed the number of police had tripled. It wasn’t until sunset that I saw the first riot police officer and I’m not sure why they were called in the first place? Seems I’m not the only one to wonder where this sudden escalation came from, seems Sam Allard – of Scene – had some similar thoughts:

That ought to have been it, is my feeling. A dust-up, sure. A couple of arrests to remind protesters that even though drinks and epithets would be flung in their direction, they must please refrain from feloniously assaulting the clientele, especially in a hoppin’ district like E. 4th St.  For God’s sake, there’s a Cavs game tomorrow. Let’s why don’t we stay out of the papers?

But if, for instance, a few Cleveland Police officers in plainclothes, or even regular police uniform, had a conversation with protesters — “That got outta hand. It’s getting dark, let us know where you’re headed and we’ll keep folks safe and informed. And please try not to intentionally engage with downtown visitors or patio-people” — that would’ve been it.

Instead, the riot police arrived. Battalions of them, assembling on Euclid as the protesters, either shouting or slackjawed, expressed the emotional equivalent of “what in the actual fuck?” And the sun was going down.

Except the protesters were by no means advancing. For the most part they were just confused. There was a police presence on E. 9th, five blocks behind them, so the only possible scenario for riot officers was pushing the quote unquote violent agitators toward a much busier intersection. The media, backpedaling on Euclid and frantically calling producers to give them the scoop whilst navigating cords, idled somewhere between amazed and amused. If it weren’t so outrageously unjust, it would have been comical: the excessive, unnecessary police equipment, the frankly performative military formations.

From the time we found the two by two formation of Stormtroopers jogging down the street they only seemed to have one focus; trap the protestors. Which is exactly what they did but was this really necessary when up to that point only 3 had been arrested, aside from those snatched for being too close to the stormtroopers line after they arrived, and little to NO property damage had been done? Of course that’s not what the Police Chief, Calvin Williams, wants you to believe stating, “”When people are given a command to disperse from what started off as a lawful protest and degenerated into random acts of violence against people just standing on the street, we have to move in and enforce our laws.” Even if a random act of violence did take place it most certainly didn’t warrant the presence of riot police, helicopters and a sneaky plan to arrest 71 people, most of whom were peacefully protesting all day long.

Stay tuned for more videos from yesterday’s protest and more later today as Deo and I plan to cover the protest at the Cavaliers Game later today.