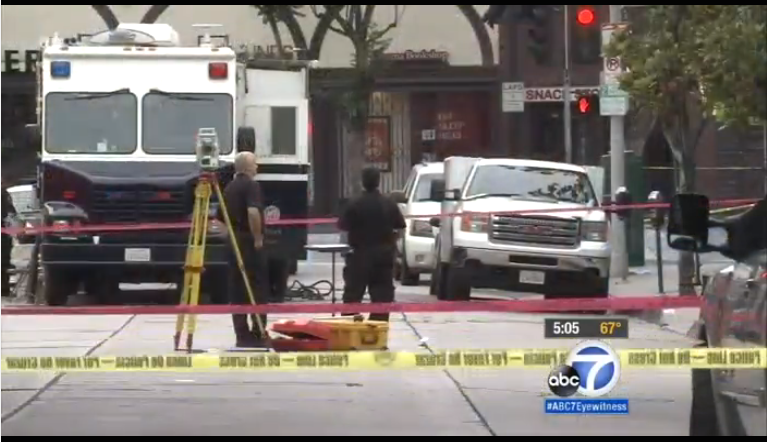 A man was shot by Los Angeles police at 2am Sunday May, 24 for reasons that are still very unclear and bear further investigation. According to ABC7 Los Angeles:

The shooting occurred around 2 a.m. on Cherokee Avenue near Hollywood Boulevard, authorities said. Several people were outside at bars and restaurants in the area during the incident.

The suspect, identified as 33-year-old Tegan James Stephens, and three other men were in a nearby parking lot. Officers who were on foot in the area saw the group and noticed that the interactions between Stephens and the men appeared to be tense.

As the officers watched the interactions, Stephens walked near the back of a white Range Rover SUV and removed a handgun from the trunk. The officers said they saw Stephens begin to follow the three men who were walking away.

That is when officers made the decision to open fire on Stephens. Los Angeles Fire Department paramedics responded to the scene shortly after the shooting and Stephens was taken to a nearby hospital in stable condition.

Stephens, who is said to reside in Las Vegas, was booked for exhibiting a firearm in the presence of a police officer.

No officers were injured in the shooting. A handgun was recovered at the scene.

The officers claim that Stephens was pointing a gun at the three men, but no evidence yet corroborates this story. Why didn’t police alert him to their presence and give him a chance drop his weapon and explain his actions? Why was no intervention or de-escalation even attempted before weapons were fired? What authorizes police to shoot a citizen before ascertaining in any way whatsoever that there is no other course of action?

It is possible that the narrative here is incomplete and that the shooting was justifiable, but the initial reports and lack of information fail to reassure that it is not just another casual killing by police.

‘Shoot first and ask questions later’ is not a valid form of justice. It is the method of the proverbial, hypothetical lawlessness that police supposedly exist solely to defend us from. When the solution to your problems becomes the bigger problem, it is time to rethink your solutions.