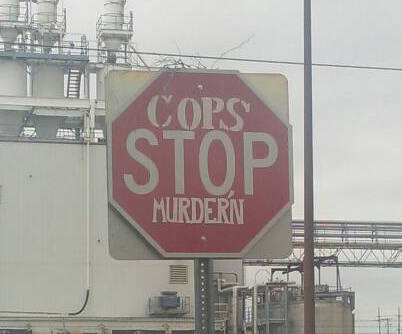 Two Kansas City, Kansas police officers were recently spotted posing for a photo that many are calling distasteful, at best. The officers were seen exiting their cruiser an approaching a vandalized stop sign by locals. The sign had been altered to read –cops STOP murder’n– some time before the incident. The two cops then took turns posing next to the sign with their guns drawn, as the other took a photo to record the precious moment. Celeste Lona, one of the witnesses of the spectacle, had the foresight to take photos of the officers taking the tasteless photos of each other.

“I’m so speechless right now. I can’t believe this really happened, and I was able to witness it,” Lona said.

Police Chief Terry Zeigler says that he is aware of the incident and that he has launched an internal investigation into the officers behavior.

“I am disappointed, it is unacceptable behavior, and we are investigating the matter,” Zeigler said.

Well, so long as they are launching an internal investigation, I am sure that the department will dishonorably discharge both officers in order to demonstrate how serious their police department is about curbing all kinds of misconduct and not harboring a culture of badged criminality and arrogant sociopathic machismo. Totally sure about that right now, but check back with me later, just in case.