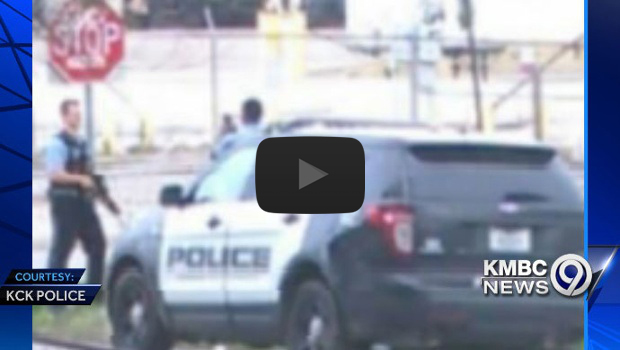 In a very bizarre case, two Kansas City, Kansas cops are facing an internal investigation (so what, cops investigating cops) for posing at a stop sign that had been spray painted. The words added to the sign were “Cops” and “Murdering.” I guess these two pigs thought that, “Cops Stop Murdering” was funny and decided it would make for a good Facebook selfie. According to Fox4KC news:

A pair of Kansas City, Kansas, police officers are facing an internal investigation after several residents say they saw them posing with rifles and taking pictures in front of a message that read “cops stop murdering.”

Celeste Lona says she watched from her front porch as the officers got out of their patrol car and walked up to the stop sign at 14th Street and Hasbrook Avenue in KCK.

“We see the cops pull up. I’m thinking, they’re on a call,” said Lona.

She says that the officers saw the sign and began laughing.

“They thought it was funny, ‘ha-ha let’s take a selfie’,” said Lona. She says she watched as she says the officers pulled out rifles, taking turns posing in front of the sign.

Other residents say they didn’t know what to think, as the officers took selfies in front of the whole neighborhood.

“I thought it was pretty scary at first, you know?” said neighbor Enrique Najera.

“You see the kids are out here playing. What if the kids would’ve seen it? What kind of message is that towards the kids?” asked Lona

The message is simple to Lona, the police find it humorous when people protest their excessive force cases and cry out about the obvious murders many police officers have committed. Even this past weekend in Cleveland, where I was covering the reaction to the Brelo Verdict, cops were openingly laughing at protesters as they marched in the streets. Why? It wasn’t because they were told a joke or because a protestor was dressed funny. IMO, they laughed because 15 cops got away with murder and nothing happened to them. They were laughing because they knew nothing would happen to them if they did, the police feel like they can do anything they want and it’s pathetic.

I have to assume that’s what these cops thought as well. They feel their excessive force, shoot first ask questions later, way of going about things is funny. They don’t feel remorse when they kill, they don’t try to prevent killings. No… the police aren’t seeking peaceful solutions. Cleveland, New York, and Ferguson have taught us this.

Consider calling the Kansas City Police Department to tell them that loss of life is not a joke. That both officers should issue public apologies and be sent into that neighborhood to restore any possible faith that community can have in those who claim to protect and serve. Of course, I know this won’t happen. At best, some guy in a white shirt and high rank is going to say, “These officers have been disciplined and we’ll handled our relations with the community.”  Let’s try to make the standard reaction null and void with a call flood.

Local Media Story about the Stop Sign and Police