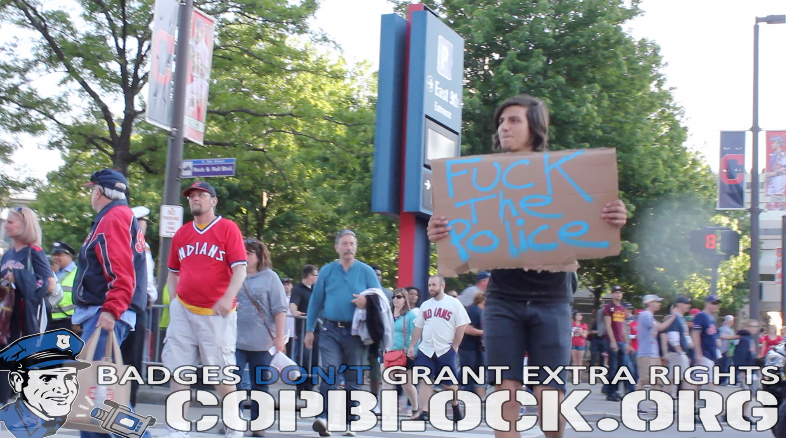 What’s going on with police lately? They seem to be on emotional high alert and prone to lose their cool over spoken words and/or hand gestures. In the last ten days I’ve published three separate stories where police officers have arrested, harassed and peppered sprayed (links are to each story or see end of post) people who either gave them the middle finger or said a swear word. I thought that was going to be it for awhile but then Jeremiah Raber (of Breaking Amish, a show I have never seen) was arrested for disorderly conduct. What did he do that was disorderly? According to wpxi.news:

Jeremiah Raber, 35, was the passenger in a vehicle that was pulled over shortly after 2:30 a.m. in White Township, police said. After the traffic stop, Raber allegedly hung out of the passenger side window of the vehicle as it pulled away and yelled derogatory curse words at the troopers.

That’s right, he called the cop a swear word or maybe even, dare I say it, a “Pig.” We can officially up the count to 4 post about over sensitive police who can’t stand to have someone give them the middle finger or say something “derogatory” to them. Why are such stories grazing our pages so often these days? Is this just a few bad cops who let their emotions get the best of them? Or is there a bigger issue behind the increase of police butthurt?

The Problem Is NOT A Few Bad Cops

Before the CopSuckers jump all over me, I understand that we’re talking about four random cops out of hundreds of thousands, but the problem is not a ‘few bad cops.’ Yes, it’s possible that these four cops were having off days, for whatever reasons, and simply lost their cool. It happens to the best of us, and if that were the “official” statement from police the following day then I’d believe this. In fact, I want to believe this because if these cops aren’t butthurt than they’re simply too stupid to realize Americans have freedom of expression and speech. You know, those crucial aspects to the foundation of government a police officers whole job is based around (which is a total joke and means crap but they should believe that crap), those silly things. For fuck sake, little children are taught, “Sticks and stone may break my bones but names will never hurt me.” How does a grown human being, who carries a firearm and purports to protect people’s rights for a living, go from ensuring those rights to stomping the hell out of them claiming, “Today it’s not [a right]”?

Furthermore, and maybe more importantly, what didn’t happen is what proves this is more than a few bad cops. The fact that 3 of the 4 arrested went to jail for some amount of time means that they were transported to a restricted facility, booked and either bailed out or waited to see a judge. This means they interacted with more than one LEO (or jailer, correction officer) and that everyone they encountered continued the process, they did NOT release them or protect them in anyway way. If the system had any sort of checks or balances to it, the minute these people were brought to another police officer, or jailer, someone would have said to the arresting cop, “What are you doing? Didn’t your mother ever tell you about sticks and stones?” Yet not a single one of these people was freed and they ALL now face court dates, trials and the possibility of jail time. Meaning not only were their rights trampled, but they’ll now be inconvenienced by defending themselves from a “crime” that anyone without a badge merely walks away from. , spare me the comments CopSuckers, your few bad apples story is bullshit and I’m not buying any of it (I will side step and say that it’s the job, the institution (government), that makes you all bad apples. You need to stop working for the man and work for the people (but that’s another blog).

There isn’t a single person (other than maybe a cop themselves) who doesn’t feel some sort of fear or become nervous when a cop is in their rearview mirror. Why is that? Maybe it’s because everyone knows what a person wearing the badge and uniform is capable of. I’ve blogged about this before in a post called, “What Cops Say Without Saying Anything At All” stating:

Combining the recognition of a gang [cops] by symbols, colors and clothing, with that of the violence they use, creates the fear factor that people relate such associations to. This is why when people encounter a gang member – whether they are the most, or least, violent gang member – they know without any interaction that an encounter with such a person means other people dressed like them (or that person them self) are capable of using violence and are commonly carrying weapons. People know that engaging such people could lead to personal harm – even death.

Everyone knows this and most react to it instinctively, as if it were a natural reaction to check your speed, put your seatbelt on and pat yourself down the minute a cop pulls up behind you. This is not natural, this is not how people react to those who are there to help, protect and/or serve them. This is why cops suck, because since most of us can remember, whenever the cops show up someone gets a ticket, ends up in jail or even dead. Cops suck, you know it and I know it. People are simply tired of the endless flow of laws, the double standards and the violence that police use on a daily basis. Folks are fed up with complying with warrantless checkpoints, violent raids and senseless killings. People are tired of being charged, via taxation, to further the police state that provides these (fake) “protectors” with the tools to make people even more scared and nervous around them. Then the irony that sets in when folks realize that those fancy toys, that they paid taxes for, end up being used on them too. Or when you realize that every act of police aggression you’ve ever faced in your life has been paid for, in part, by you.

This is why people are saying, “Fuck the police” and giving them the finger more. People are tired of your behavior, people want you to do what you say you’ll do and not what your bosses (the government) tell you to do. I know I am one of those bothered by your actions and you’re only creating more and more disgruntled people each day. Therefore, you can expect more middle finger and vulgar language.

Below is a video I made of a man carrying a “Fuck the Police” sign at the Brelo Protests in Cleveland this past weekend. He didn’t get arrested, but he probably would have, if it wasn’t for so many cameras around. He did take some heat throughout the day for the sign, as you’ll see in the video below.

Swearing Is NOT A Crime; “It is today” says Cincinnati Cop

Another Cop Upset About Getting the Finger