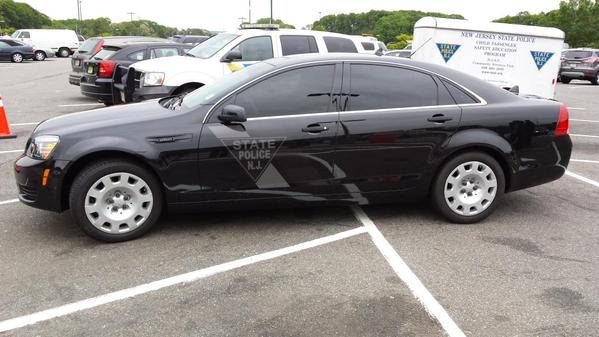 It is not like the police state needs any more tools or weapons at its disposal, but the New Jersey State Police are getting one anyway. Introducing the “Ghost Car” that will supposedly help keep the roads safe by having undetected cops on the road. According to ABC6 Action News:

Motorists on New Jersey highways may see the newest car patrolling the roads. Then again, they may not.

New Jersey State Police have unveiled “ghost cars” as their newest tool to catch unruly motorists. The black Chevrolet Caprices appear unmarked from far away. But a closer examination shows a faint gray State Police emblem on its sides.

State Police spokesman Capt. Stephen Jones says they’re trying to avoid notice on the highways so troopers can catch dangerous drivers who behave in the presence of marked cars.

He says the cars give drivers piece of mind that they’re talking to actual troopers and not someone masquerading as an officer.

These are nothing special but I can’t help but wonder, why not have cops just drive regular cars. What’s the point of having this ‘ghost’ car that clearly has a state pig logo on the side? I don’t get it? Cop logic I guess or this is nothing more than what a 3 year old does with their toys after Christmas morning, shows them off. Just beware if you’re in New Jersey for these sneaky cops, in fact, just beware. The police state is alive and well in NJ.