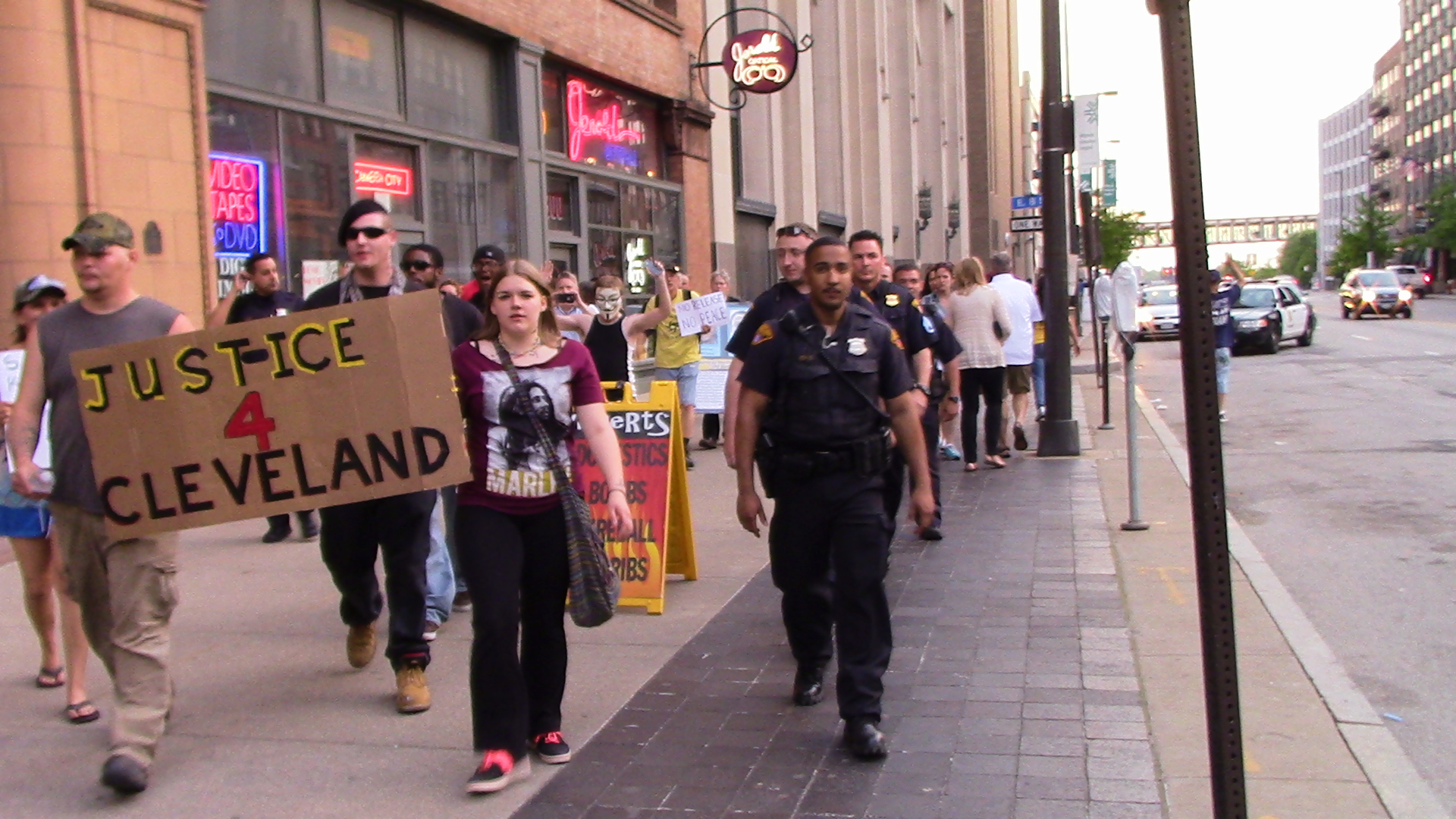 The 71 protesters that were wrongly arrested on Saturday night were released Monday morning after spending two days locked in a cage for doing nothing more than following police orders. Ademo was there and can vouch for the fact that the protesters did nothing wrong.

They were protesting the Micheal Brelo verdict. He was found not guilty of Manslaughter charges in the deaths of Timothy Russell and Mallisa Williams. The couple shot 137 times by over 15 officers who responded to their car backfiring as though it was a gunshot.

In my opinion, if you cant tell the difference between a backfire and a gunshot, you probably shouldn’t be allowed to be a cop! Brelo fired 49 of the 137 shots that killed Timothy and Mallisa, and yet the kangaroo court could not find him guilty. This further proves that you can not convict a cop in Cleveland. Meanwhile officer Loehmann, who shot 12 yr old Tamir Rice, STILL hasn’t even been questioned yet. And they wonder why you can’t convict a cop in Cleveland!?

The protesters were offered a plea deal, whereby they were charged with failure to disperse. A charge which is basicallyreduced to a traffic ticket. So do nothing wrong and still get charged with fines and restitution to a government that is already robbing us daily and giving us shitty service for that money they steal from us! Twenty of the protesters will fight the bogus charges to clear their name completely. I do not believe in taking a plea unless its absolutely necessary, but in this case, it seems extra ridiculous. The cops cornered these poor folks and told them to disperse. Then they prevented them from dispersing, so what were they supposed to do? Cops on one side tell you “Go Back” and soon enough you run into a wall of stormtroopers on the other side telling you to “Go Back”

This situation is just as ridiculous as the fact that Brelo was found not guilty! Cleveland Scene reports:

For those willing to plea no contest or guilty, city lawyers agreed to amend the first degree misdemeanor failure to disperse charge to a minor misdemeanor (essentially the same seriousness as a traffic citation, a defending lawyer explained). The reduced charge came with no more jail time and fines that were waived by Judge Cassidy. A majority pleaded no contest and went on their way; 20 pleaded not guilty and will fight in court to clear their name completely.

“What do I make of the charges?” said famed civil rights attorney James Hardiman to Scene following the 9 a.m. arraignment, “They’re overly bogus. They never should have been charged in the first place. But since they were charged, we’re here to deal with it.”

Hardiman, of the NAACP, was one of a number of high profile Cleveland attorneys — with Gordon Friedman and Michael Nelson, among others — who volunteered to represent those arrested Saturday night.

“In the sweep that occurred on Saturday, there are a number of issues we have concerns about,” explained Michael Nelson, flanked by the other lawyers in an impromptu press conference outside the courtroom. “One, the the ambiguity of the failure to disperse. It wasn’t clear. There were a number of people that were just caught up, no differentiation from protester and non-protester. The fact of the matter is there was a significant lack of clarity whether they committed any actual wrongdoing.”

In this justice system that so many of you slaves are so addicted to, like some junkie ready for his next fix, killer cops go free and peaceful protesters go to jail for fabricated crimes. Doesn’t sound like justice to me!

As I have personally told Chief Williams of the Cleveland Police, “Start arresting killer cops and stop arresting peaceful protesters and all the protesting would stop!” Apparently he wasn’t listening. Shame on all the police officers involved! You violated your oath on Saturday. But it doesn’t seem as though Cleveland Police give a shit about the oath they took, as is evidenced by the laughing and taunting they did of protesters on Sunday. A significantly smaller crowd, including yours truly, gathered on Sunday for the Cavs game. Hey, 71 of em were in jail on trumped up bogus charges!! We did the best we could! We gathered at Memorial park for a Memorial day cook out. The police responded by conspiring with the fire department to evict us, but there were no grounds for eviction. That didn’t stop the cops from trying to evict us a second time. By that time, however, we were done and moving on to protest.

Police escorted and surrounded the protesters as they marched and then sat in the street in front of the stadium. Most pigs were smiling and laughing at the protesters as if to say, “We got away with another murder, and you idiots are a joke.” There was one pig in particular at the Sunday protest that had his forearm tattoos covered with tape. He refused to say what was written, but I could tell it was some kind of Latin saying. It started with “VE”. This thug with a badge and a costume finally broke down when pressed, and tried to lie and say it said “Diaz”. There aint no “VE” in “Diaz”! What do you think we are? Stupid? It probably said something like, “They can hate us, as long as they fear us.”

I saw one who I thought might have been different. An older cop I know as Sgt Peters.  You lied to me. You told me all you wanted was peace, and who do I see leading the riot squad arresting people for no reason? Sgt Peters! I can’t wait to see him in the streets to ask about this! You can check out Ademo’s video to see where he recognizes Peters and asks about it as well.