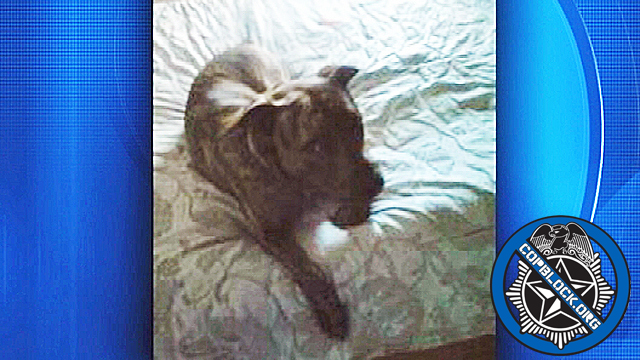 An Orange County, Florida woman says a 911 call to police for help ended with her door being kicked down and her dog being shot and killed by an officer while she was not even home.

Deborah Jones says she had called police, hours before, earlier in the day, when she and her boyfriend had an argument. Jones says Orange County deputies responded after she left.

Her 4-year-old pit bull, named Itchygo, was in the Tymber Skan Condominiums home alone when deputies kicked the door in, and fatally shot him.

Officials say that because of the nature of the call, officers had to force their way into the residence and that the dog “charged at them.”

Jones says she waited on officers after making the call but eventually left. When she returned, she says she found deputies surrounding her home and a paper authorizing the county to pick up her dog’s body.

Deputies say because they never received another call to cancel the response, they had to “respond urgently.”

“They had to shoot my dog for no reason. They kicked my door in. I can’t even lock my door,” Jones said. “My dog was right here dead. They wrapped him up with a blanket.”

Jones’ daughter, Kita Williams, says neighbors told deputies no one was home, but they went in anyway.

“If three neighbors are telling the officers no one’s here, that don’t give you proper cause to continue coming in,” Williams said. “This is [Itchygo’s] house. He’s got to protect this house.”

Williams says she is concerned for her mother’s safety now that Itcygo isn’t around to protect her.

In recent years, the killing of canines by police has become a contentious issue resulting in the creation of the term “puppycide.”

Advocates of ending “puppycide” point to the blaring double standard that exists between police and the rest of the population.

Animal rights activists and civil libertarians say the shootings are widespread and result from officers having little-to-no training on how to deal with animals.

Some analysts claim a dog is shot by police in the U.S. every 98 minutes.