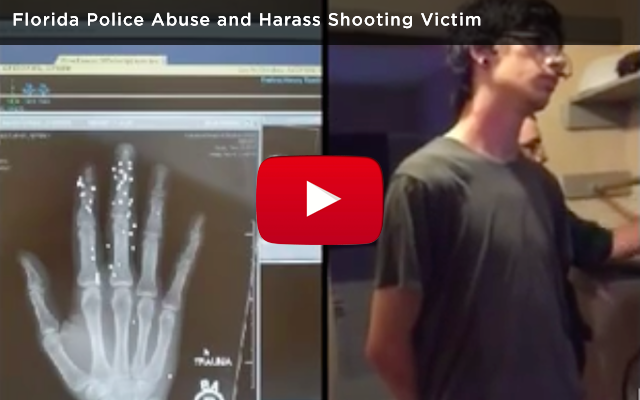 The following post was submitted to CopBlock.org by Michael Burns:

Officers were called because while people were attempting to break into an apartment, a shot was fired through the door striking one of the residents.

Upon arriving, police smelled what they believed to be marijuana and they began to treat the shooting victim and other victim within the house like criminals.

After hours of being treated like a criminal, the shooting victim made it clear that he wanted to make an official complaint against the officer and it went downhill from there.

The Detective claims the victim purposely bumped into him while they were both trying to go through a door at the same time. This was quickly used as a reason to arrest the victim, with 47 pellets still in his hand from being shot. Once the victim was cuffed and under threat of arrest, the shooting victim was coerced into giving a confession that he did purposely bump into the officer. This is something he denied  prior to being put into handcuffs and once again denies, now that he is out.

Is it just me or does the officer here sound like that crazy guy/gal you dated for a month in high school? “I just want you to admit…”

Essentially what the officer is saying is that he is too stupid and deluded to understand what a shithead he is, and in order to keep that delusion alive, he needs the young man that he was harassing to tell him pretty lies that protect him from his psychological defects.

That he actually has the fucking audacity to ask the guy, “Are you gonna be an adult about this?” makes me want to explode with the irony displayed.

I mean, the nerve, right? This kid was just shot and now you are gonna arrest him for a plant and harass him for not being happy about the situation. And then blame him for your little toddleresque display of power in the doorway? What the fuck kind of world is this sack of shit living in? Someone should have blow-torched this officers mothers vagina shut during puberty. Any time travelers out there reading CopBlock?