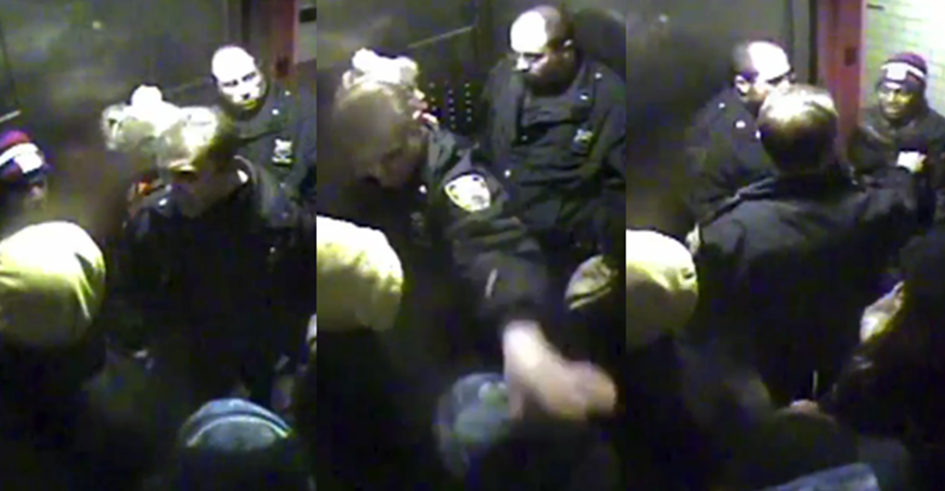 A New York City Housing Authority video has been released showing two NYPD officers intimidating and harassing an elevator full of people in a housing project.

The subsequent interaction resulted in criminal charges for 18-year-old Eastern New York native Jaleel Fields who has now settled a lawsuit with the city for $50,000, filed in a federal court in Brooklyn, which claimed the officers violated his civil rights.

This video shows “the everyday harassment kids who grow up like Jaleel go through,” Fields’ attorney, Martha Grieco says. “The cops treat them like garbage from the jump and then lie about it with zero consequences.”

In the lawsuit, Fields accused the city and the two officers of false arrest, malicious prosecution, and excessive force.

The incident began when Fields decided to leave his apartment to go to the grocery store on February 22nd, 2013.

On his way out of the building, a female friend suggested he go back inside, because there were a bunch of police officers in the building, which regularly engage in “vertical patrols” of housing projects where they, sometimes in pairs, go up to the top of a building and then work their way down.

“She said, ‘You shouldn’t go this way, because there’s a whole bunch of cops,” Fields said. “So she grabbed my arm. You know how like people get married and walking down the aisle? She grabbed my arm like that, and I started walking back with her.”

Video shows the duo, the unidentified female in a pink jacket, and Fields in a fuzzy ski hat, arrive next to the project elevator arm-in-arm.

After Fields and the girl get on the elevator, they are followed by several other residents, including a pair of Fields’ friends, one in a white hood, another in a gray hat, and then finally two NYPD officers.

Before the elevator doors close, the footage shows one of the officers start arguing with Fields’ friend in the white hood and then push him with his right hand. The boy with the gray hat leans over toward him, and then the officer assaults the boy by shoving his head away.

At this time, the lawsuit claimed, Fields started laughing at the officers display, which attracted the attention of the other officer before he told his friend in the gray hat that he doesn’t have to talk to the police.

The cop and Fields begin to argue and when Fields tries to leave the elevator, the officer pushes him back inside.

More words are exchanged before the cops push Fields outside where he was ultimately arrested off-camera.

Police charged the teen with disorderly conduct claiming he obstructed “pedestrian traffic” by blocking the elevator doors. To the contrary, the video shows without a doubt that Fields went out of his way to let people off the elevator.

Police also charged Fields with “obstructing governmental administration” for telling his friend that he didn’t have to talk to the officer, the lawsuit claimed.

Police claimed Fields also struggled and elbowed one of them outside the elevator, which led to additional charges of attempted assault in the third degree and resisting arrest.

According to the lawsuit, one officer punched Fields in the face during the arrest, leaving a small scar.

By a stroke of luck, Fields’ initial court-appointed attorney somehow coaxed the New York City Housing Authority to turn over the footage early in the process of his criminal proceedings.

“Normally, the NYCHA doesn’t give out its videos,” Grieco said, leaving one to contemplate just what would have happened to Fields in court if the footage had not surfaced.

After the video was shown to the DA, all charges against the teen were dismissed.

In reference to the $50,000 civil settlement, a spokesman for the New York City Law Department, which represented the officers in the suit, said only, “After reviewing all the evidence, we determined that a settlement was in the best interest of the city.”

In is not yet clear if the unidentified officers involved will face disciplinary action.