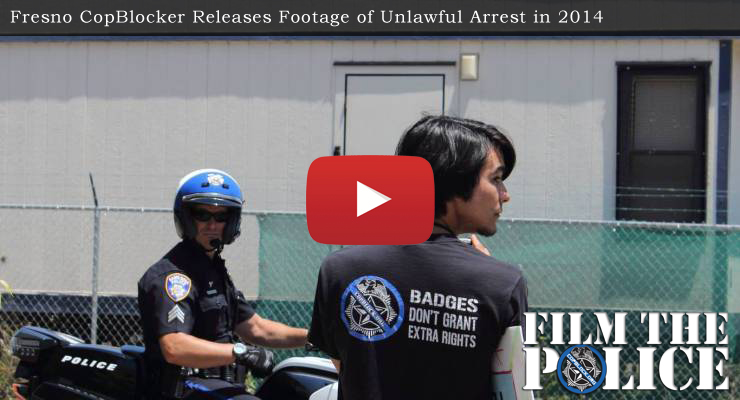 Brian Sumner is a Fresno CopBlocker, and overall police accountability activist, who doesn’t take any shit from the cops. Especially cops who are threatening him with a taser and can’t articulate why they’re detaining him. One look at the two plus years of videos Brian has on his YouTube Channel, FreeFresno, and you can tell that he’s not one to back down. From the recent Oakland Curfew protest to his 2 min CopBlock video Brian is always ready to smash wits with the cops, the video below is no exception.

For over 5 minutes Brian he held at taserpoint (new word I guess) and still owns Sgt. Andy Murcado by asking, at first, questions about his detainment. Like, “Am I being detained?” or “What crime am I suspected of?” Naturally when Murcado fails to provide a reasonable answer Brian becomes more frustrated and calls the officer a “pig” and points out how this is what a police state looks like. The entire time Murcado is getting his tongue lashing from Brian he’s stating that he’s resisting arrest, which is ridiculous, since it hasn’t been explained to him what he’s being detained for in the first place, but also because he’s not doing anything. He’s just standing there.

Ultimately, Brian was taken into custody, charged with ‘making threatening gestures’ and resisting arrest, by the thuggish cops. The reason why Brian just released this footage is because his public defender, in another case, told him the charges where dropped. Yet, no one informed Brian so that he could obtain his property back. What a colossal waste of time huh?

Until next time, keep those cameras rolling, the questions flying and remember that, “Badges Don’t Grant Extra Rights.”