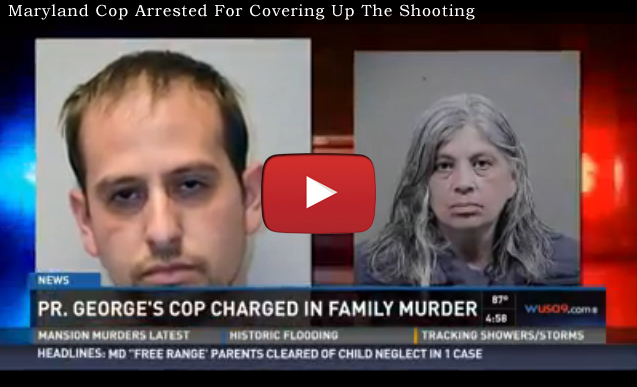 Waldorf, Maryland – Richard Conway, a Prince George’s County police officer was arrested this past Monday night, in connection with a shooting outside of a McDonalds that left one man, 24 year old Navy veteran Robert Mange, dead and the officer’s pregnant ex-girlfriend severely injured. Conway’s mother has also been arrested and charged with murder, she is purportedly the shooter, while Conway himself is accused of giving her his police issued handgun, helping to set up his ex-girlfriend, Krystal, and then trying to cover up the crime after the fact. The ambush is suspected to have stemmed from an ongoing custody battle over the former couple’s two children.

In a press conference, Sheriff Troy Barry acknowledges the involvement of Officer Conway’s firearm, stating “ballistic evidence recovered from the scene was consistent with the type of ammunition used by the Prince County Police Department”

Conway had arranged to meet with Mange and Krystal to drop off their children, as they had visitation rights. Instead of Conway, they were met by Conway’s 51 year old mother Caroline, who jumped into the car, and used Conway’s police issued .40 Caliber handgun to murder mange, and shoot the mother of Conway’s children with the intent to kill. Caroline then met up with her son at a friends house, where she admitted the shooting to a friend. So far, the gun has yet to be found and Conway isn’t talking. Conway is accused of staging phone calls acting as his mother in an attempt to set an alibi for her, hiding evidence, as well as watching the children while his mother was out murdering their mother. Miraculously, Krystal survived the attack, as did her unborn baby, and she is already out of the hospital.

Conway is currently suspended without pay and in police custody.

See video reports of this case below:

For more information on this story, you can read it Here, Here, and Here.