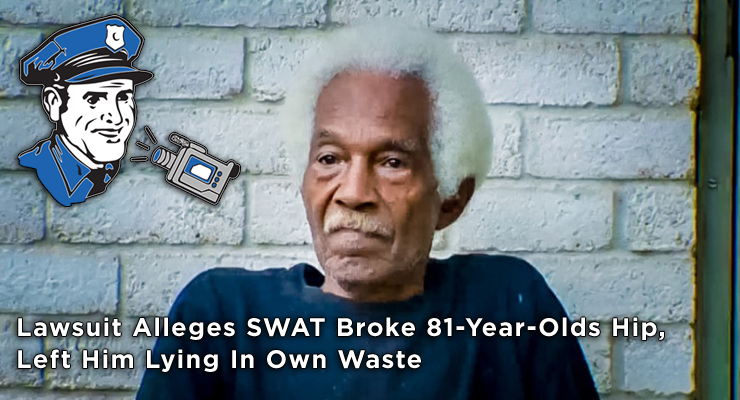 In a federal lawsuit filed against Williamson County and the city of Georgetown, Texas, an 81-year-old man is alleging that SWAT team officers broke his hip after throwing him to the ground while he was sitting in a chair on his porch drinking coffee.

Herman Crisp says he was the target of unnecessary police force that left him with a broken hip, when, on Sept. 24, 2014, SWAT officers were serving a search warrant there as part of an investigation into his nephew, who often stayed at his home.

The lawsuit asserts that during the encounter, officers handcuffed Crisp and slammed to the ground, leaving the man incapacitated.

The suit claims the officers then left him there, without getting any medical attention, where he wasn’t found by his family until the next day lying in a pool of his own waste.

“After they left I tried to get up then, because I had to go to the bathroom and I couldn’t go. So I just crawled over here and laid on the floor right down there,” Crisp said. “My sister came and called the paramedics and they came in here.”

“All these police force are obtaining former military equipment and they are dressing up in these masks and sending them out like soldiers to attack members of our community, and that’s wrong,” Spivey said.

Crisp, who spent his career in the Navy, required a lengthy hospital stay and continues to recover from his injuries. Police and local officials have not yet commented on the lawsuit.

An ACLU report, entitled War Comes Home, looks at 818 Swat incidents from July 2010 to October 2013, that were carried out by more than 20 law enforcement agencies in 11 states – only a small portion of what is going on around the country.

SWAT teams, a 1960s invention, were initially created by officers to help react to perilous situations like riots and hostage takings. In recent years however, they have developed into something entirely different.

The study found that the majority, 62 percent, of SWAT team deployments were for drug searches. Likewise, 79 percent involved raids on private residences. In fact, only about 7% were used for incidences the technique was originally developed for.

“Law enforcement agencies are increasingly using paramilitary squads to search people’s homes for drugs,” the study says, adding that, “Neighborhoods are not war zones and our police officers should not be treating us like wartime enemies.”