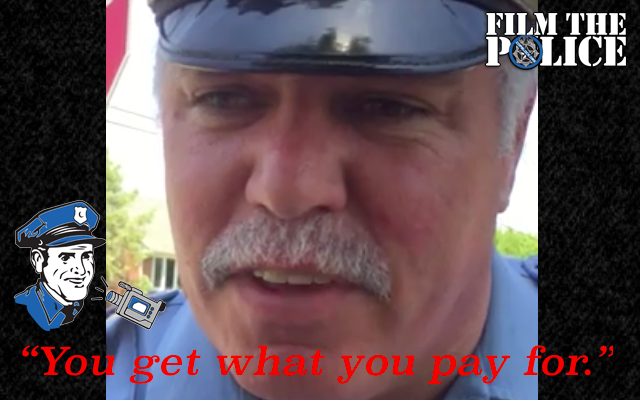 The following videos (at bottom) and report were submitted to us by Rachel Ogden. On Sunday, May 24, 2015, in the early afternoon, a group of seven animal liberation and social justice activists gathered in the neighborhood of animal abusers to expose them. During their peaceful demo, activists were interrupted by Sergeant John Hamil of the Ridley Township Police Department.

Immediately, Sergeant Hamil began questioning activists about why they were there, despite the fact that the police department is notified, as a courtesy, before every neighborhood demo. When the officer could not get an answer from the activists, who were exercising their right to remain silent, he turned his attention to one of the female activists. As the activist politely asked the Sergeant for his name and badge number, he towered over her and attempted to intimidate her out of filming the encounter. The activist, Rachel Ogden, stated that she has every right to film and the officer tells her to stop the “silliness”.

He then claimed he had received reports of obscenities and blocking of traffic. All of the activists are aware of their rights and engage as little as possible with this officer. Once he realized he was not going to get the activists to speak to him, he turned to leave. He then rudely told Ogden to get out of his way and claimed she was blocking the sidewalk. Ogden panned her camera down to the sidewalk to reveal a large unobstructed area that the officer could pass through. The officer attempted, once again, to intimidate Ogden and told her, “If you want to do this the hard way, I’ll do it”. Ogden did not move an inch and the officer moved around her. He then told the activists, if he gets one more report of obscenities, that he will, “shut yous all down”. When he walked back to his red police vehicle, he paused to tell Ogden he does not find her filming of him intimidating. As he drove away, he rolled through a stop sign.

Activists march through this neighborhood at least once a week, loudly chanting and taking advantage of First Amendment rights. As a courtesy, the activists call the police department before each demo to advise them of the date and time of the event. This weekend, the seven activists were wearing bandanas and veils to mourn the animals. Please note, the activists were not cursing (which isn’t illegal, regardless – editor) or blocking roadways.

Wow, this fuckin’ guy. Can you say Patronizing Cliché?