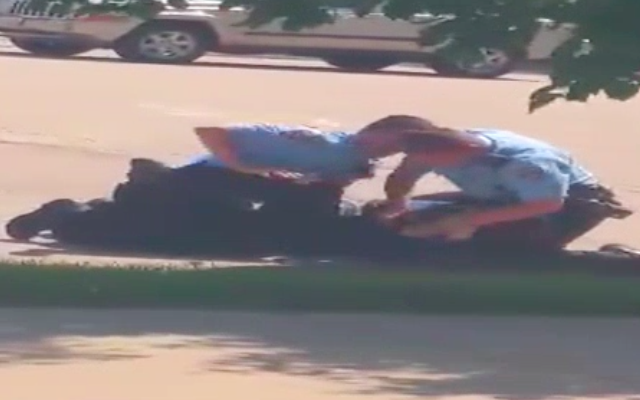 Residents of the Los Angeles suburb of Riverside recently captured video footage of police brutally beating a homeless man for no apparent reason. The man being beaten is clearly no threat to the much larger, healthier and violence-versed officers. Yet that doesn’t prevent them from hitting, elbowing, kneeing and kicking the man as he pleads with them to stop.

What most people hear to be cries for mercy and compassion, police hear as an invitation to bullets, fists, brutality and a bit of the old Ultra Violence. What most people see as a weak and helpless man, police see as a jungle gym for playing the most sadistic boyhood bully games.

How much longer must we endure this blatant thuggery? How much longer will people wait quietly in the shadows before they cannot take any more? Avoiding the violent revolution that police states historically tend to lead to will depend on acting immediately within our communities to radically redesign public safety and protection. If sensible heads do not work now to challenge the status quo, then a critical mass will eventually occur in which less thougtful and charitable heads will prevail.

The alarms are going off all around you. It is time to wake up while it is still your choice to do so. Failure to act now will result in an overreaction later. Help restore sensible humanity before it is too late!