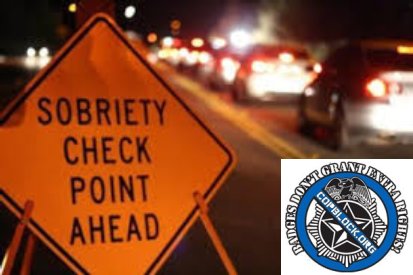 Someone submitted the following story to CopBlock.org’s submit tab., and I wonder if he got any video, because he didn’t post any. He did not wish to leave a name. So, if you are reading this, get us some video of any checkpoints in Euclid. You can submit them as you have done here, or send to DEO@CopBlock.org.

The Euclid Police Department (EPD) sets up sobriety checkpoints and does NOT follow State of Ohio guidelines, as required by the US Constitution. They DO NOT give public notice of exact time of operation and exact location. I have warned them multiple times and EPD states they don’t have to follow State of Ohio guidelines and that they DO NOT have to provide proper public notice. The reason for my concern is that I am a resident and a guest of mine has been harassed, verbally abused, and illegally searched. She was treated like a criminal and she had NOTHING to drink, nor was she arrested. In other words, a good citizen and a professional. She now is in fear of another encounter with EPD!!!! I have contacted the mayor, police chief, and city council, but so far they have not done anything about it and continue with the ILLEGAL checkpoints!

Euclid is a minority community. EPD is an arrogant police force. When I confronted the police chief, he bullied me. Like WHAT ARE YOU GOING TO DO ABOUT IT??!?!! If you feel your civil rights are being violated SUE THE CITY OF EUCLID!!! I am a veteran and this is a sucker punch to the gut!!

I have some first hand knowledge of this, as this is not the first person to contact me about Euclid police checkpoints. Another Greater Cleveland Cop Blocker from the area said the same thing. He did get some video, but it was a while back and I can’t remember his name.

My friend, Garret, and I tried to film one there also and ran into similar problems. Garrett was calling them all week, because they made the media announcement they were supposed to. However, the law states they only have to give general information for those press releases. They are then supposed to affirm within 24 hours the details to the media, as well.

Every time Garrett called, they claimed to not know anything about a checkpoint, even when told, “You had the general announcement in the paper last week saying it was this weekend! Now you are telling me there is no checkpoint?”

Maybe we should all start calling Euclid police and ask why they feel they are above the law? Want the number?