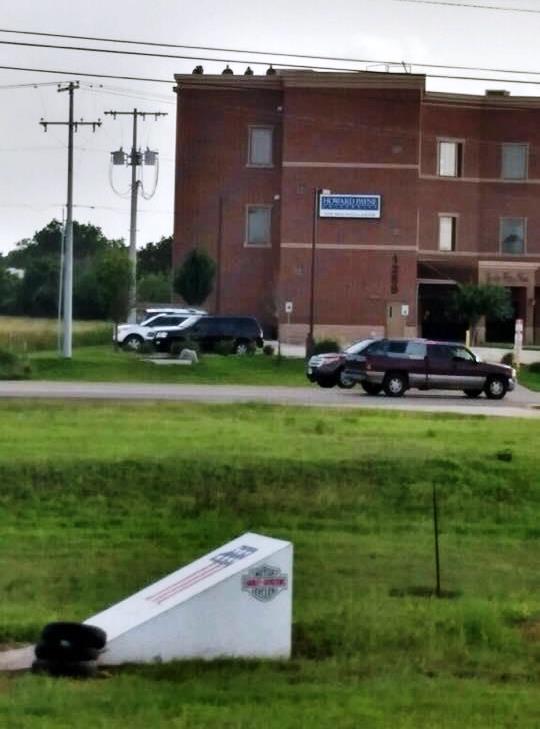 Why is it that police will often have a strong presence around events that involved themselves. I posted a video on this matter when I caught Cleveland Police sitting outside the Tamir Rice Memorial on a daily basis, the same department that was responsible for murdering him now watches over his memorial everyday. Now in Texas police are placing snipers on the rooftops of fundraisers, gatherings, and cookouts for those who were killed while in a shootout with police. According to Breitbart.com:

Photos on the Facebook page of a group called Free All The Waco Bikers appears to show police snipers on an apartment building rooftop, across the street from a Harley-Davidson dealership that was hosting a memorial service for one of the bikers shot and killed outside a Twin Peaks restaurant in Waco on May 17.

This is the second time in less than a week that snipers have been posted outside a Texas Harley Davidson dealership after the Waco incident.

The most recent sniper sighting occurred at the “fundraiser and celebration of life” for Jesse Rodriquez, a decorated Vietnam vet, who was known to fellow bikers as “Mohawk,” and frequently did charity rides with his wife. The fundraiser was held at Geuene Harley Davidson in New Braunfels, south of Austin.

It’s unclear why snipers were in place. Many who knew Rodriguez—a father of 7 and grandfather of 19—have disputed that he was a criminal. Rodriguez will be buried on Friday.

Judging by the photos posted on Facebook Wednesday night, it appears snipers were posted on two rooftops across from the Harley dealer-hosted event, which included a raffle, food and music. Breitbart Texas used Google Maps to confirm that the apartment building shown in the photos is indeed directly across from the Harley dealership.

The second sniper incident was reported this past Saturday at Longhorn Harley Davidson in the southern Dallas suburb of Gran Prairie. CBSDFW.com reported that police positioned snipers outside the dealership during a motorcycle event. No incidents were reported.

The use of military-style weaponry by law enforcement is one of the puzzling aspects of the Waco incident, which police have referred to as a “biker shootout.”

The Waco police have not yet explained why a SWAT team, and other law enforcement with heavy weapons, were in the parking lot of the Twin Peaks restaurant that was hosting a Confederation of Clubs and Independents (CoC&I) meeting. As Breitbart Texas has reported, those meetings have never previously been the scene of violence.

Of course if someone were to ask these cops what they were doing on these rooftops they would most likely respond, “protecting people.” That’s kind of hard to believe considering the Waco police won’t provide the details of the shooting that’s the cause for most of these gatherings and most of these folks are burying their loved ones. What would the police do if people with sniper rifles sat on the rooftops while a fallen LEO convention was going on? I think we all know the answer to that.

Only in a police state can the same people who withhold information, fail at their job regularly, and continually get into dangerous situations be allowed to point high powered rifles at the funeral, or fundraiser, of someone their colleague murdered (most likely, since they won’t prove otherwise, that’s my assumption) last week. It’s utterly disturbing to think about.