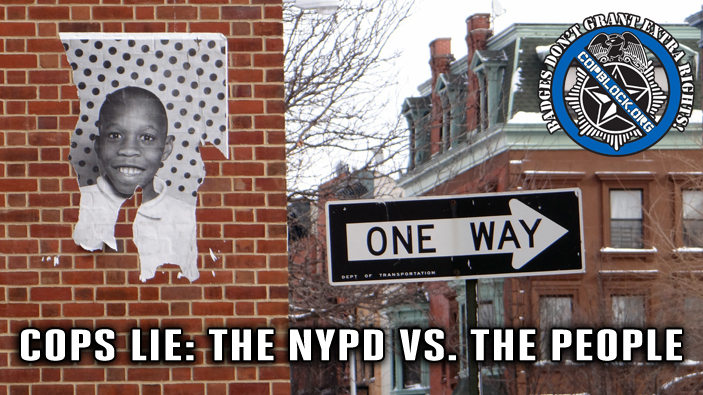 This post was shared via CopBlock.org’s submit page by “Brooklyn Criminal.”
It is a cross-post from their website, www.brooklyncriminal.nyc.

Without dismissing the valid and necessary discussion regarding race and policing, there is another divide that defines the current state of police-civilian relations … trust. On one side is a trust in the perfection of cops, an almost religious-like defense. On the other is an almost complete distrust of all things police, which can manifest as disrespectful protest or much, much worse. While we at Brooklyn Criminal would classify ourselves as having a healthy distrust of the police, we have no intention of talking in extremes. We have a good deal of experience with the criminal justice system, the bulk of that as public defenders in New York’s most populous borough, Brooklyn. We are here to talk about our experience dealing with cops, prosecutors, and the people that are affected by them. So many public conversations in this arena occur on eggshells, with the rare meaningful statement only made amidst reverential disclaimers (e.g. Police have difficult jobs but…, the vast majority of cops are good people but…). Not here. Here, we intend to not only give a voice to the views held by so many New Yorkers and Brooklynites, but we intend to support those views with the kind of arguments that have made us damn good trial attorneys. No disclaimers, no apologies.

Cops lie. This is something we, personally, have heard thousands of people say to us as their lawyers, friends, or just in random conversation. However, this statement never sees the light of day in the media. Talking heads fall over each other to constantly heap generic praise on the police, often calling them — all of them — heroes. However, as soon as the Times or Village Voice writes an article critical of specific police actions or policies, the conversation quickly turns to whether criticizing the police is even allowed. Policing in this city and this country will never change as long as the many voices who legitimately distrust the police are not allowed to join the conversation. These voices are valid because they rest upon decades of police misconduct, everything from horrifying corruption to endemic bullying. Frank Serpico, an actual hero, is still seen as a ‘rat’ by the rank and file of the NYPD. Louis Scarcella lied dozens of innocent people into long-term prison sentences and still walks the streets a free man. No one will ever receive so much as a reprimand for the choking death of Eric Garner.

These tales, which seem to find their way into our news on a daily basis, are paired with other stories of cops fabricating evidence (lying), destroying evidence (lying), forcing confessions out of innocent people (lying), and many other forms of systemic dishonesty. But under the constant deluge of such stories, what has never happened? An admission of wrongdoing. The NYPD, one of the most historically corrupt departments in our nation’s history, has never admitted to doing anything wrong. In fact, when they have been called to the carpet for engaging in criminal activity, they have responded with petulant indignity. Even recently, following unspeakable tragedy, when the entire city had thrown their support behind the department, it’s leaders decided to blame the public and its elected leaders for directly causing the murders of two police officers.

This us-versus-them mentality within the police department is not unique to New York.

The Fraternal Order of Police in Baltimore stated, very publicly, that “bloodshed will most likely continue until those in positions of power realize that the unequivocal support of law enforcement is required to preserve our nation.” However, as goes the NYPD, so goes the rest of the nation, so let us begin to peel back that onion.

Allow your mind to drift back to a time when young men from New York’s poorer neighborhoods were being arrested constantly for ‘possessing marijuana in plain view.’ In fact, the mind need not drift at all, for these arrests still happen today. Here is a fact. Possession of personal amounts of marijuana was decriminalized in New York in 1977. One would assume that such a law change would drastically reduce the number of people arrested for public possession of marijuana. That logical assumption, however, has been stamped out by the NYPD’s incessant, machine-like need to make arrests. At first, marijuana arrests declined, but between 1997 and 2010, over 500,000 people were arrested for possession of marijuana in public view, making New York the marijuana arrest capital of the world. In 2014, Mayor Bill de Blasio promised to end arrests for possession of personal use amounts of marijuana (i.e. have the police finally follow this 35 year old law), and weed arrests in New York actually increased during his first year in office.

So, here is a question. How have the police been able to continue making tens of thousands of marijuana possession arrests each year when such an act was deemed only a ticketable offense back in 1977? When the legislature decided to take action to reduce the number of marijuana arrests occurring in New York state, they determined that it would still be a crime (albeit a misdemeanor) for someone to possess marijuana that is burning or in public view. The clear, undeniable purpose of the caveat “in public view” was to make it illegal for people to smoke pot openly in public.

The NYPD saw not a policy handed down by the people’s representatives, but a gaping loophole which would allow them to continue to make obscene amounts of arrests. The NYPD, especially under Ray Kelly, engaged in a systematic campaign of lies and deceit to make sure that they could continue to make enough arrests to justify their bloated existence. For decades, hundreds of thousands of New Yorkers (mainly poor, young kids) have been arrested for possessing a bag of marijuana in public view (not a joint or blunt or pipe; a bag). During the stop-and-frisk years, police would routinely ask whomever they decided to stop and frisk to empty their pockets. When the person stopped would produce a small bag of marijuana, he would summarily be charged for possessing marijuana “in public view”. In a rare instance of honesty, both the NYPD and the city’s D.A.’s offices openly admitted to this Kafkaesque practice. (To its credit, the Bronx D.A.’s office declined to prosecute these offenses).

Even with stop and frisk gone (is it really?), “public view” arrests continue. While there have certainly been a few instances where cops have actually seen someone with a bag of marijuana in public view, the notion that this happens hundreds of times a day in New York City is absurd. To be certain, there is plenty of anecdotal evidence to support the idea that police almost never actually see tiny, innocuous bags of grass in public view.

The simple fact that arrests for pot possession drastically increased following decriminalization should tell you all you need to know about the NYPD’s policy regarding honesty.

This fact alone is persuasive, but it is also unsatisfyingly general. Let us switch gears and provide proof beyond a reasonable doubt that the NYPD is not to be trusted.

Over the course of our careers, we have had eyes on hundreds of cases that follow a very simple set of allegations. The police pull a vehicle over for a minor traffic infraction (speeding, failure to signal, overly tinted windows, etc.). When the police approach the vehicle to presumably ask for license and registration, they observe drugs in plain view in the console of the vehicle.

This ‘fact’ pattern (simple traffic stop, drugs observed in plain view in the console of the vehicle) seems to make up the majority of cases where the police claim that they found drugs in a vehicle pursuant to a traffic stop. First, there is no reason to assume that our observations have been an anomaly in this field. At this point, it can be said, without reservation, that the police allege that they see drugs in plain view in the console of a vehicle in a sizeable portion (majority?) of traffic stops.

Second, let us examine the full reality of such an allegation. For the drugs to be seen in the console, that would mean that the driver has decided to place them or leave visible contraband in that console.

He has foregone numerous pockets, a glove box, or even the floorboard, to have these drugs sitting in the console while he is driving.

While this surely has occurred, there can be no doubt that such behavior is extremely rare.

Third, even if you were to assume that a particular person was driving around with drugs sitting visibly in the console, what happens when he gets pulled over? Most of us who have had the misfortune of being pulled over know that the cop is never in a rush. There is the time that it takes you to see their turret lights and pull over to the side of the road. The quickest this would ever happen is 15 seconds. Then, once stopped, you sit there for a full minute at the very least while the officer runs your plate, exits the vehicle, and saunters up to the window. During this entire period of time (1 minute 15 seconds, minimum), a person sitting next to drugs that are in plain view, fully aware that a cop is about to look into his vehicle, fails to simply put them in his pocket or drop them next to his seat?

These same allegations have routinely been made when multiple people are in a vehicle, further defying reason that numerous people failed to take evasive action prior to the police looking into the car. Of course, one can imagine reasons why this person or that person might leave those drugs sitting there like a present for those cops, but, once again, we can agree that such a scenario is extremely rare. So at this point, one of two things is true. Either hundreds, if not thousands, of people per year are too slow and stupid to hide their console drugs or these cops are lying.

Finally, what the hell is a console? The allegations never say “cup holder” or “tray.” No, every different type of structure that exists between the front two seats of a vehicle (including closed compartments) are all classified generically as a “console.”

Cops love to keep things vague to mask the reality of what happened.

Unfortunately, many judges fail to require the specificity one would expect when a person’s freedom is on the line.

Going beyond the question of do they lie, the obvious follow up is why? It is actually quite simple. If a cop says he just happened to innocently see drugs in plain view, then the person arrested has very limited recourse to fight those lies. It is then up the defendant (or more accurately, his attorney), to convince a judge that this cop has lied, and judge’s tend not to share the same skeptical view of the police as the public at large. Although some judges have shown the courage to find just that, the vast majority will find the cop credible and pass it along to trial. In most jurisdictions, this is fatal to the defendant’s case as now the cops get to tell their lies to the jury while the prosecutor nods in agreement. But this isn’t most jurisdictions. This is Brooklyn. And Brooklyn juries require cops to prove their story, not just tell it.