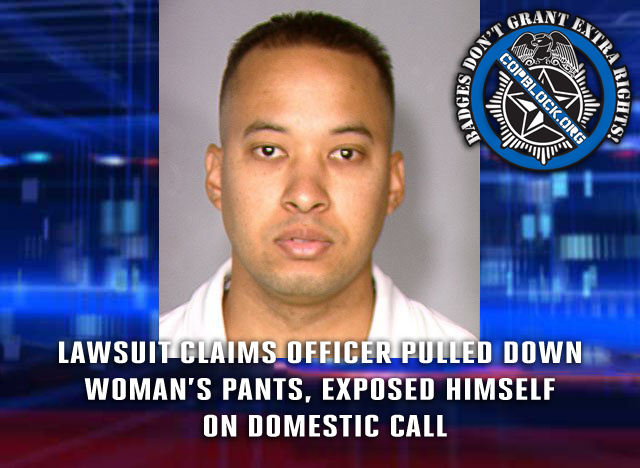 A lawsuit filed in federal court on May 27 alleges a “lewd and disgusting” Las Vegas police officer pulled down a woman’s pants, photographed her, and then exposed himself.

Sasha Boseke says she called the Las Vegas Metropolitan Police Department on June 1, 2013, after a “domestic incident” with her boyfriend, who assaulted her. The boyfriend was arrested.

The lawsuit claims that after a female officer had already taken photos of her injuries, Officer Solomon Coleman waited until all other officers left, and followed Boseke to her bedroom where he told her to pull down her shorts so he could see her bruises.

When Boseke “refused to expose her body,” Coleman “forcefully pulled down [her] shorts and undergarments, and, further, told [her] to lean over her bed, which exposed her nude body” the lawsuit says.

While bent over her bed, nude from the waist down, “Coleman took photographs of [Boseke’s] nude body with a cell phone camera,” without her consent and then “exposed his penis to [her] and made lewd and vile remarks.”

“At no time did [Boseke] consent in any manner to the lewd and disgusting conduct of  Coleman, nor did [she] engage in any consensual sexual activity with defendant Coleman,” the lawsuit states.

Boseke says Coleman told her, “he had to leave but that he would return that evening.” When the officer did in fact return, Boseke refused to let him in, and called the police to report him.

An internal police investigation into the incident found that, according to his activity log, Coleman remained at Boseke’s apartment for 36 minutes after all of the other officers had left.

After pictures and other materials showing the covert filming of sex acts were found on Coleman’s phone, he was indicted by a grand jury and charged with two counts of oppression under color of office, two counts of open or gross lewdness, indecent exposure, and capturing an image of the private area of another person – all misdemeanors.

Coleman, who no longer works for the Las Vegas Metropolitan Police Department, is scheduled for criminal trial on June 29.

In the federal lawsuit, Boseke is seeking punitive damages for assault and battery, emotional distress, civil rights violations and negligence.

Las Vegas police have refused to comment on “pending litigation.”