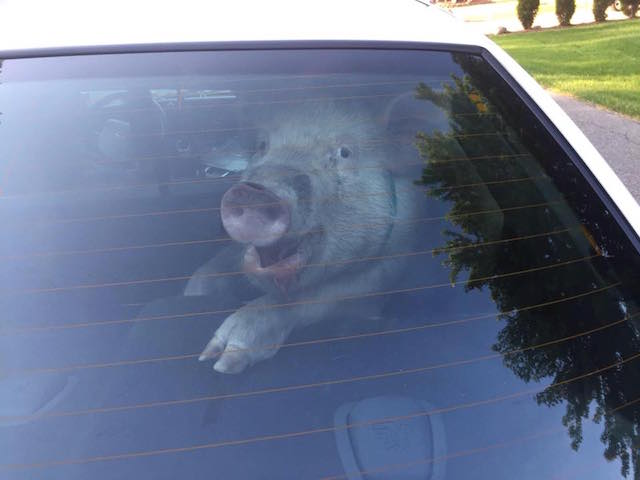 You wait your whole life for the little moments, you know? According to WXYZ ABC7:

SHELBY TWP. (WXYZ) – Police in Shelby Township (MI) responded to a call to pick a rather unusual suspect on Thursday: a pig.

The department posted the above picture to its Facebook page Thursday night.

Debbie DeRiemaecker tells 7 Action News that she was doing yard work at her home on Wolf Drive when all of a sudden a pig came barreling toward her. It chased her into the front yard before getting distracted by a decorative ball.

DeRiemaecker wasn’t sure what to do, so she called 911 laughing and explained the situation. Moments later, she tells 7 Action News, a cop car pulled up.

We’ve learned the pig has been reunited with its owner, but not before pooping in the police vehicle. I want so much to add to that. I want to write witty ripostes and groan-inducing puns and to redefine what ‘irony’ even means anymore, using this story as an example. Yet nothing I could say would add to the absolute perfection, the cosmic beauty or the divine humor of such an incident. The universe has a sense of humor. Maybe it is even trying to tell us something?

Also, the pigs name is Daisy.