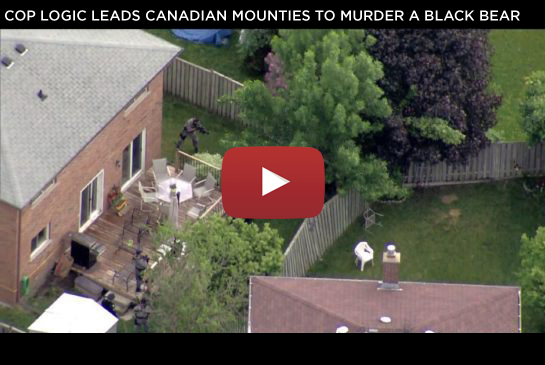 Before you ask, no, this is not one of Joshua’s satire pieces that have been breaking the internets here at CopBlock.org. This story is from Newmarket, Ontario where police confirm that they shot and killed a black bear that had been, “stuck up a tree.” Spokesperson for the police gave the usual BS stating the,“Bear began coming down from a tree and became a risk to people in the area,” per their tweet York Regional Police. “Officers have shot the bear due to having no other options.”

Officers do not have tranquilizers or other options for dealing with wildlife. We could not let the bear harm a person while waiting for MNR

Seriously, you can’t make this crap up. Even when it’s a BLACK BEAR the police claim they have no other options but to shoot. They also state that the bear was ‘stuck’ in the tree? How the hell does a bear get stuck in a tree? If it was so stuck then how did it get down? Are the Canadians just practicing in case they wanted to adapt the USSA policy of shooting unarmed-black-anything-that-moves? Watch some of the videos below and ask yourself, why are there so many police around for a bear in a tree? What would make you feel more safe, a bear, or a neighbor full of police (even Canadian ones)?

I can’t believe a bear had to die because of Cop Logic but I guess I’m unable to process that ‘logic.’

BLACK BEAR MOMENT BEFORE BEING ‘STUCK’