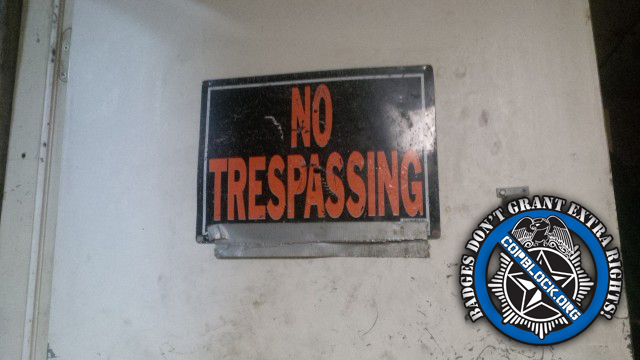 The following story was shared with us at our Submissions page by Rrenis Petrey:

On January 27th 2012 Scott County (Kentucky) Sheriffs Department began a long process of violating my rights as a man and as an American. It began when two deputies pulled into my driveway past the signs I have posted declaring no trespassing and private property. I own sixty acres and the value is close to a half of a million dollars.

When I left my man cave in my barn and met them in my driveway it was 1:15pm, Friday afternoon. I was ask if I knew a Tony Wilson and I said that I did and that he works for me on my farm. They said they needed to talk to him, so I asked if they had a warrant. Greenleaf responded, “It’s nothing like that, we just need to ask him a couple of questions about his mom’s car.” I motioned for Tony to come to the driveway when he got to the front of my barn I was told to go about my business. I then told the deputies to either take Mr.Wilson, if they had a warrant, or to leave my property. They responded that they would leave when they wanted, because they owned Scott county.

I then called my wife at 1:17pm at her work to inform her that the cops were here talking to Tony. I also wanted to have another witness to hear me demand that they leave my property, even if just on the phone . At 1:30-1:45 I went back to my man cave, where I lived at the time, and observed the cops illegally search Mr.Wilson After the search he agreed to call his mother about the whereabouts of her car, which he was using with her permission while she was in the hospital.

Mr. Wilson had been walking the road picking up trash. I own 2300 ft of road frontage and their is always beer bottle and cans and lots of trash. When he walked up toward my barn he had a bucket of trash. He had picked up a bottle of something like aspirin and it had four or five dry white tissues or coffee filters. After the cops illegally searched him, they kept a couple of items, and threw some others on the ground, along with a Mars bar wrapper and a coke can. I had been watching this all happen from my living quarters in the man cave.

I then exited my home and locked the door like I always do, and as most do in the place in which they live. By now it was around 2pm, so I ask the two cops to leave again, but was told to shut my fucking mouth by Lt.Greenleaf. They had walked into my barn, where I had cows and other farm supplies. I again called my wife so she could bear witness to me telling the cops to leave my property with or without Mr.Wilson. They said that I was acting funny, therefore I must be hiding something. I said that I have nothing to say, nor nothing to hide. I just wanted them to leave.

At 2:30pm I received a call from a contractor in Lexington, Ky whom I  informed that I couldn’t talk just then, because the cops were here talking to Tony. I have phone records to back all of this up.

Later on in this mess the two deputies testified under oath on the witness stand that they arrived at my property at 3:51pm. I have five witnesses and four affidavits from nine different people that either saw them, or talked to me on phone before 2:30pm while they were there.

After Officers Johnson and Greenleaf had been on my property for over two hours they  they claimed they could smell an “active meth lab”.  I informed them their allegations were nuts, and instructed them to get off of my property. They did not comply. Instead they broke into my living quarters and charged me with manufacturing meth and possession of several rifles and hand guns that my wife had gotten from her recently deceased grandpa.

The cops did finally produce a warrant at 8:30pm.  Mr. Wilson and myself were stripped naked and eventually sprayed down with a fire hose in 18 degree with a wind chill of 2 degrees.

After the fire department tested my clothes and my body twice with, no drug manufacturing were chemicals found. The only chemicals present were intended for cattle, or weed killer and bug killer, which you will find on every farm in Kentucky.

It has been over forty months since this began. In January of 2013 I filed a federal lawsuit. In May of 2013 the same deputies who harassed me the year before followed two guys who had been working for me. They pulled them over and found 1 30mg Oxy on one of them. This was around 8pm. At 11pm these same two deputies, who I have had all this trouble with, and five state troopers invaded my farm. They tackled me in my front yard while I was in underwear with my hands above my head.

These two cops were ordered to turn in phone records over two years ago and still have not done so.  I was ordered to provide mine and it took me two weeks. I go back to court on the 5th of June for another continuance. They planted evidence and premeditated this crime against me. I have pending criminal charges that are over forty months old and a civil lawsuit that is on hold until the criminal case is settled.

Since all this began my wife has been ran off the road twice by these cops, and I have been pulled over and had a gun pointed at my head twice. Part of why I am sharing this is so that if I end up dead, at CopBlock and the world will have the story. I generally have nothing against the police but I do have something against the color the of laws that made this possible. Please post and please help me get media exposure so my family doesn’t get killed. I’m not worried about myself, because they have already taken my life. I am a 44 year old combat vet. I think dirty cops are going to bury this country.

Mr. Petrey is concerned for the safety of his family after what he alleges has been long term systematic harassment by police. We are posting his story to protect him and his loved ones, yet we at CopBlock.org are not making any claims of his innocence or guilt. There appears to be a bit more to this story than was shared with us, however these allegations may themselves be part of the falsehoods constructed by the officers. We just do not know. In the meantime, Petrey shall be considered innocent until proven guilty.

Either way, the war on drugs has been an absolute failure. While methamphetamine is a serious social and health issue, it is also often its own greatest punishment. While I would never recommend it, those who wish to soil their lives with meth should be welcome to do so without systematic abuse by authorities. So long as there are no victims, there is no crime.