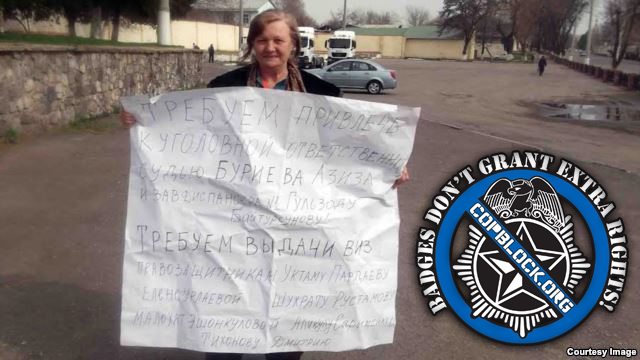 58 year old Yelena Urlaeva, the head of the Uzbek Human Rights Defenders, was held for 18 hours in the town of Chinaz while she was interrogated by police, and forced to strip and undergo sexual penetrations of her vagina and anus. The search was performed by paramedics looking for a flash drive containing pictures and interviews with teachers who are being forced to work in the Central Asian nations cotton sector.  She was then transported to the hospital where she was asked if she swallowed the flash drive, and forced to undergo X-Rays.

When questioned again by the police, they threatened the safety of her family, as well as the network of activists she works with. The police did not return her notes, nor her camera, when she was released. They even went as far as to threaten to post the nude photos taken of her while in custody on the internet. They obviously are very adamant about the content not being made public.

Steve Swerdlow, a Bishkek-based Central Asia researcher for Human Rights Watch, said Urlaeva’s detention on May 31 and alleged abuse while in police captivity represents “a new low by the Uzbek government” and an effort to “brutalize the country’s civil society.”

“We rarely see cases of brutality [in Uzbekistan] outside of prison that goes so far, and this demands an immediate, unequivocal response by international actors, including the United States and the European Union,” Swerdlow told RFE/RL in a June 1 telephone interview.

Urlaeva said in the e-mail that she plans to file a complaint against the police officers and doctors in Chingaz involved in her detention and to “continue monitoring forced labor” in Uzbekistan.