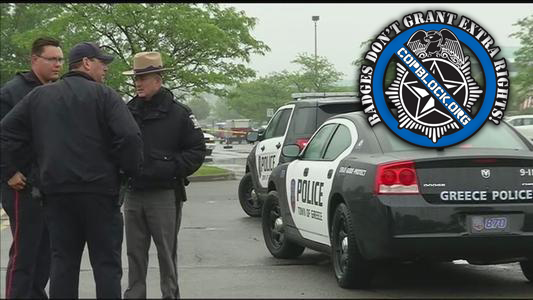 [UPDATED – 8:06pm] Police hold conference that provides victims name and video from security footage at the mall. See video below.

Greece police received a call from concerned family members about their missing loved one, stating that he might even be suicidal. Later at around 3 pm that same day, Greece Police Officer Eric Hughes spotted an individual he thought to be the missing person in the parking lot of the Mall at Greece Ridge. According to the Associated Press:

“I’m not sure of the exact details, but I believe the suspect was in a car at one point and the officer was out of his car,” Phelan said.

Police said at some point, Hughes felt threatened and fatally shot the man. They’re calling it an isolated incident.

Police are not releasing the victim’s name.

This is simply tragic, my condolences go out to the family of the man murdered. In today’s legal climate you can no longer call the police for help. Even something as simple as locating a missing person can lead to death. Hopefully there’s some video footage of the parking lot, either via the Mall security or dash cam on the officer, to show everyone exactly what happened. The video below, from WHEC, does show some footage that seems to be from a cell phone, but that isn’t clear in the video.

From the WHEC report, there seem to be some discrepancies regarding whether the man shot was the man who had earlier been reported missing by family, or if it was a mistaken identity incident. According to the Democrat & Chronicle, “Greece Police Chief Patrick Phelan Tuesday afternoon will share further details of the officer-involved shooting outside The Mall at Greece Ridge on Monday.”

Stay tuned to CopBlock.org for more details about this officer involved shooting out of Greece, NY. In the meantime, visit CopBlock.org’s Resources tab and expand your knowledge on how to keep yourself from being victimized by police. Or join one of the many CopBlock Off Shoots here.