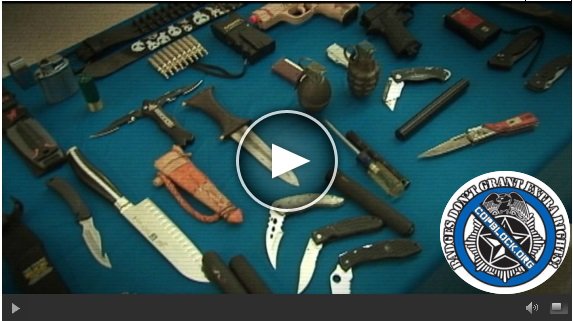 Although they tend to be pretty good at finding oversized contact solution containers and mothers with unauthorized breast milk, the Transportation Security Administration has once again shown that they pretty much can’t find any actual weapons. In the latest series of tests where undercover Homeland Security Agents took realistic looking weapons through airport checkpoints to test the TSA screeners, they failed to find those “weapons” 67 times out of 70 attempts. That boils down to 95% of the time that had someone actually been walking through with a hand grenade and shiny pistol like the one to the left, they would have made their flight with time to spare.

As thorough as the Transportation Security Administration screeners may be as they rifle through your belongings, the agency isn’t performing where it counts.

In a series of trials, the Department of Homeland Security was able to smuggle fake explosives, weapons and other contraband past airport screeners in major cities across the country, according to ABC News. Officials briefed on the Homeland Security Inspector General’s investigation told the station that the TSA failed 67 out of 70 tests conducted by the department’s Red Teams — undercover passengers tasked with identifying weaknesses in the screening process, NJ.com reports.

During the tests, DHS agents each tried to bring a banned item past TSA screeners. They succeeded 95 percent of the time…

In one test an undercover agent was stopped after setting off an alarm at a magnetometer, but TSA screeners failed to detect a fake explosive device that was taped to his back during a follow-on pat down. This isn’t actually something that should be particularly shocking since the TSA has a long history of failing these types of tests. This dates all the way back to 2006, when screeners in Newark (where one of the planes hijacked on September 11th departed from) missed 20 out of 22 guns and bombs that were sent through security, but also include incidents in 2007 in Albany, NY, and 2010 in Houston, TX. So while the TSA employees tend to be really good at finding stuff to steal, using the screenings as a pretense to grope people they are attracted to or expose the breasts of underage girls publicly, and humiliating innocent cancer survivors; they have a pretty solidly bad track record of not finding stuff they should actually be looking for. In fact, in spite of claims of enhanced techniques and the acquisition of even more evasive equipment since the last time they failed miserably at these type of tests, they’ve only gotten worse and have still yet to capture a single terrorist attempting to board a plane.

In the wake of the most recent massive failure, the head of the TSA has been re-assigned (but not fired obviously, because he works in a government job and that just doesn’t happen, even if the agency you run has a .050 batting average on the one thing they are actually supposed to do.) Also, they’re going to enhance those techniques again and look for some more expensive and faulty equipment to buy.

Homeland Security Secretary Jeh Johnson on Monday reassigned the leader of the Transportation Security Administration and directed the agency to revise airport security procedures, retrain officers and retest screening equipment in airports across the country.

The TSA’s acting administrator, Melvin Carraway, is being reassigned to a different job in the Department of Homeland Security. Acting Deputy Director Mark Hatfield will lead the agency until a new administrator is appointed.

The directives come after the agency’s inspector general briefed Johnson on a report analyzing vulnerabilities in airport security — specifically, the ability to bring prohibited items through TSA checkpoints.

Johnson would not describe the results of the classified report, but said he takes the findings “very seriously.”

So there you have it, some incompetent people have been moved around and things are being taken very seriously. Since the truth behind the TSA is that they are designed more to control people (they officially refer to those lines you wait in as “corrals“) and to give the appearance of safety by making it look like they are doing something, that’s gotta be pretty reassuring (said nobody ever).