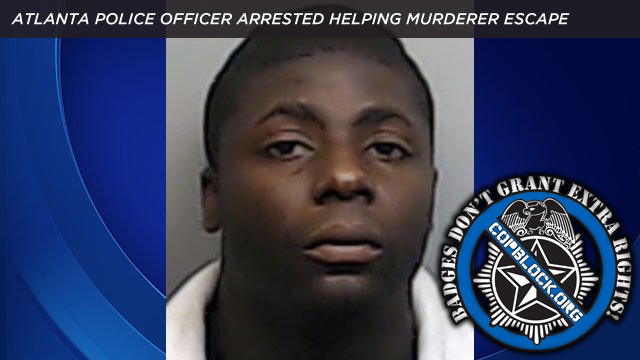 Tommy Williams took an oath to protect and serve the community, to uphold the law at every chance possible and protect people from those who want to do harm to them. It seems that Williams used his power of discretion when one of his friends – Jabri Mathis, who just so happened to be wanted for 13 charges, including two counts of murder, aggravated assault with a deadly weapon and possession of a weapon while committing a felony- escape police custody. According to the Fox6 station in Atlanta:

CBS46 was told Williams was with the fugitive when he helped him escape on May 15.

The arrest report shows cops were chasing Mathis when he ran inside a home in the 500 block of James P. Brawley Drive. That’s when Mathis escaped from the back of the house, jumped a fence and ran away.

Atlanta police hasn’t commented on details surrounding the case, but several officers tell us Mathis and Williams were friends. That’s why he helped the fugitive to escape from the home.

Williams was arrested for hindering the apprehension of a criminal and violation of oath by a public officer.

Both Mathis and Williams were apprehended by fugitive unit of Atlanta police. Williams was released, but Mathis was denied bond and remains at the Fulton County Jail.

Williams is charged with violation of oath of public office, obstruction of an officer and hindering apprehension of a criminal. He was suspended without pay and relieved of duty, a department spokesman said Tuesday. He’s due in court this Friday and I’d be willing to bet that in a few months he’ll take some sort of plea deal that’s essentially a slap on the wrist.

This is just another messed up story that serves to highlight that police   are more likely to act ‘criminally’, assist actual criminals or harm you (in some form) than anyone else. Police allow drugs to be sold on the streets because it’s a business they cannot stop. Police will help their friends because most people would help their friends. Police don’t care about the law because the law doesn’t care about them.

If you want to see two of the most severe recorded cases of this, you can read up on two highly publicized people; Whitey Bulger and Freeway Ricky Ross. These guys not only had police officers in their pockets to turn their heads, but as protection, tipsters and escorts for drug running and criminal activity of all sorts. If that doesn’t tell you that the police are serving their best interest and not yours, then I don’t know what would. Stories like this shouldn’t surprise you if you’ve been paying attention.

We need to start thinking of an alternative to this one size fits all government policing service we’re all being force feed here. I know I’m tired of this poor service. Are you?