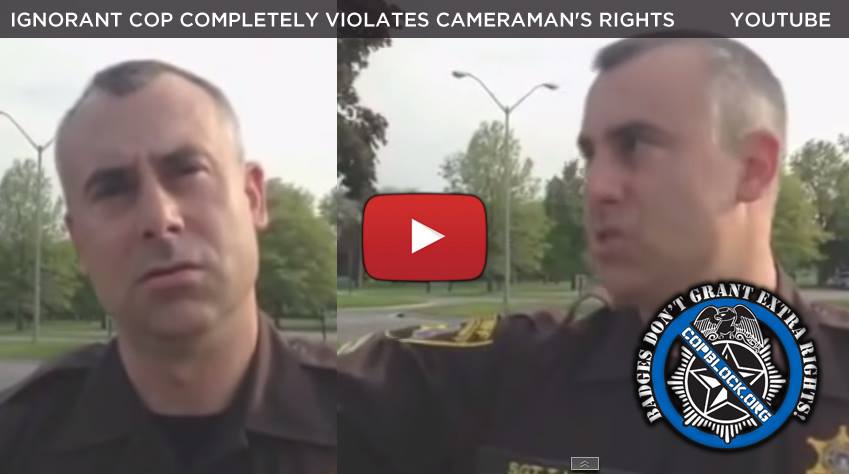 The video for this story comes from the YouTube channel for LibertyIsForEveryone.com.  The cameraman is only identified by the name Nunyabeeswax.  He and another person shooting back up video were on county property;  which is public property, and were videotaping the grounds of the Oakland County Sheriff’s Office.  The videographer is approached by Sgt. T. Vida of OCSO and asked if he needs help with something.  The guy filming states that he has nothing to say to the deputy.

The deputy is aggressive from the get go and gets in the cameraman’s face.  The cameraman backs up and the deputy advances on him again and then walks around him still asking for ID.  Nunyabeeswax asks if he is being detained and the deputy only answers that he wants to see identification. Beeswax then states that he is going to assume he is not being detained and is going to walk away.  Immediately the deputy states that he is now being detained.  When asked what crime was committed to be detained, the deputy states trespassing.  He says that he wants to know who he is talking to and that the cameraman was on private property taking video of personal cars and license plates.

Several other unidentified officers arrive, but seem to only be observing the interaction.  Vida becomes more aggressive and walks behind the cameraman and removes his wallet from his back pocket and takes his identification card. He then writes down information off of the identification and then hands the wallet back to Beeswax and says he is no longer being detained.  As the deputy is writing down the information, you can clearly hear the cameraman state that he does not consent, and the disgust is quite evident in his words.

What this deputy displayed in the video is a brazen lack of regard for this cameraman’s constitutional rights, including his right to be secure in his person and property.  Sgt. Vida illegally removed his property from his back pocket and then went through his wallet in order to gain his identification. Had an ordinary citizen done this to another person, it would have been construed as assault as well as robbery and would have subjected the offender to being jailed.

According to the Oakland County Sheriff Office website, their mission statement says:

The Oakland County Sheriff’s Office is dedicated to the safety and protection of the citizens and businesses within our boundaries.  We are committed to the task of keeping our courts and correctional system secure and our service is built upon integrity, respect, vision, and leadership.

Do the actions of Sgt. Vida demonstrate the department’s mission statement?  Do you see anything in the video that shows “Integrity, respect, vision, and leadership.”?  From my view, all I saw was an officer high on power that knew he had no legal right to detain this guy. He abused his power to illegally obtain Nunyabeeswax’s personal information.  He did this in the presence of fellow officers who stood by and watched this very overt violation of a citizen’s civil rights and let it happen.  The inaction of the other officers present shows that they too possess zero integrity as officers that are entrusted with the protection of those citizens they serve.

Contact the Oakland County Sheriff Dept. and let them know how you feel about the video you just watched.  Let them know that we are not going to stand for these blatant violations of citizens’ rights any longer.  Demand that all officers present in the video be given swift and just punishment for their illegal actions.