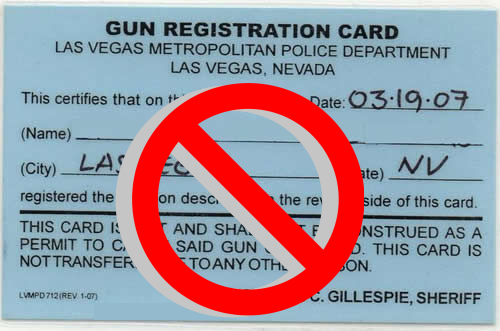 handguns with the police. Clark County, which includes Las Vegas, is located in the Southern-most region of Nevada and comprises nearly 75% of the population of the entire state. Prior to the passage of those bills, Clark County was the only area within Nevada with such a stipulation.

While Nevada prohibits counties or local governments from passing gun laws more restrictive than state laws, Clark County had been given an exemption in the past with regard to the registration of handguns. Up until now, anyone buying a handgun (or moving from another state/county) had up to 60 days to apply

for a “blue card.” In addition, the three day waiting period and restrictions on open carrying within local parks have also been overturned by these bills, although gun bans in some public buildings remain. That currently includes schools, colleges

, or universities, although an active bill, dubbed the “Campus Carry Bill” (Assembly Bill 487), would enable open carry (and concealed carry, with a CCW permit) on college campuses.

Via the “Nevada Carry” Blog:

Here is a summary of what the new language of the state preemption statues say in detail: