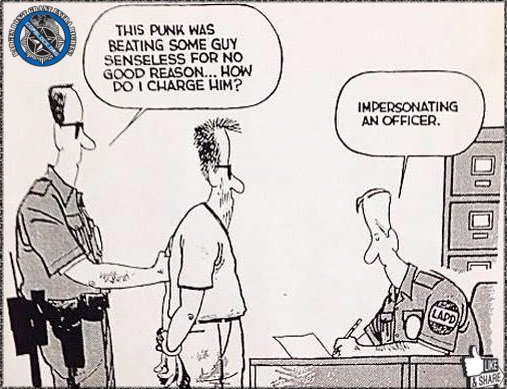 On Saturday, police in Somerset, PA arrested a drunk man, who had set up an impromptu DUI checkpoint in the middle of a road late at night. He was rather quickly charged with impersonating a police officer.

Police say a man who set up a drunken-driving checkpoint complete with road flares while pretending to be a Pennsylvania state trooper was drunk.

diagonally across state Route 601 and set up road flares at about 4 a.m. Saturday.

A motorist who stopped says Shaulis claimed he was a trooper and demanded to see a driver’s license, registration and insurance

When real troopers arrived, police say Shaulis tried to hand a BB pistol to the car’s

passenger and said, “I can’t get caught with this.”

A preliminary hearing is set for June 9.

A spokesman for the Somerset Police Department said, “We had no choice, but to place him under arrest for impersonating the police. Everybody knows that annoying random people late at night with little actual effect is our thing. And can you believe the guy was drunk and trying to arrest people for being drunk? Who does that? I mean really, that’s an actual question. Because I forgot that one guy’s name, but he’s been doing that for years. You know who I’m talking about don’t you Sarge?

“I’m not really sure,” replied a sergeant in the back of the room

. “Arresting people for stuff we do ourselves is kinda one of our things, too. So, it could actually be a lot of people in the department and pretty much nationwide.”

rumors that the SPD had offered

Shaulis a spot in the next academy class stating, “The guy had a gun and was wearing a uniform and he didn’t even kill anyone. He’s clearly not ready to be a cop. Anytime you get an excuse to kill someone or their dog, you gotta go for it. You know like those French guys say ‘Carpe Diem’ and YOLO and all that.”

When it was pointed out that it was actually just a BB gun, he quickly brushed that aside stating, “Oh, well

who has the time to spend more than two seconds figuring stuff like that out. Next thing you’ll tell me that you can’t actually shoot bullets at me with a cell phone. Besides, we got IQ standards on the force. If this guy was smart enough to know the difference between a real gun and a toy, he’s obviously going to be way above the cutoff for our IQ regs.

There’s no place out there on the Thin Blue Line for these type of guys with all their book learning. People think you just show up and eat donuts all day, while shooting up steroids. We only do that about 75% of the time we’re on duty most days. You have to be ready to beat or kill innocent people for no good reason when given the chance. Besides, that guy took it upon himself to do something. Obviously, we want people that just do their job.”

(If you haven’t figured it out yet, I’m a little worried about you. But just in case, the bottom portion of this post is all satire. It is, of course, based on a real incident.)