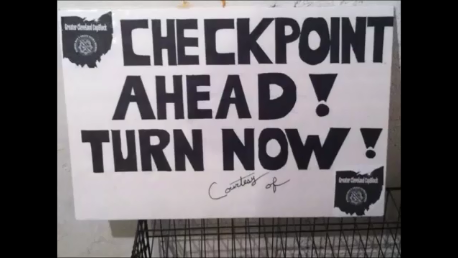 Special guest host Micheal King, better known as Rhode Island Mike. He helped guest host last week too and we had a blast! I will not be calling in late this week!We are gonna talk about my trial or lack thereof in Parma for holding a sign warning of a checkpoint. I was cited for obstruction last June for holding my sign, that said, “Checkpoint Ahead, Turn Now!”

That citation was given to me by an abusive cop, named James Manzo, of the Parma Police Department. The irony of that is that Mr Manzo was, at that time, recently involved in a lawsuit where the city of Parma had to pay a young man $40,000 because Manzo assaulted him with his flashlight. Manzo then tried to cover up his crime by saying the young man hit him while he was putting m=him in the car. This shitbag has the balls to say something about me holding a sign? You can see the video below.

Check out last weeks show in the video below.

This and more tonight on CopBlock Radio Show. Live at 10 PM Eastern standard time on LRN.FM. You can also check out the live video on CopBlock.org/show.