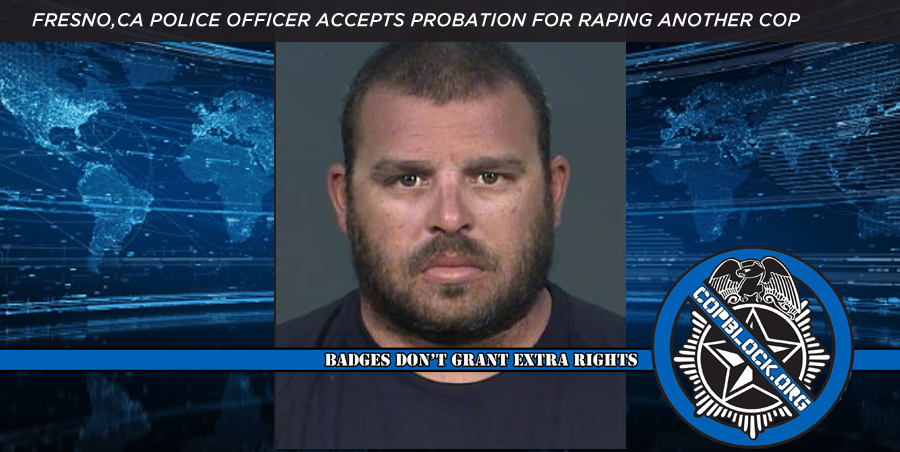 William Wyatt, who was an employee of the Fresno Police Department from 2003 to 2012, will not spend any time behind bars.  According to the Fresno Bee, he’s expected to be sentenced to probation instead.

Fresno defense attorney Mark Broughton, who represented Wyatt, said Thursday his client accepted a plea agreement because it offered him “probation with no additional time in custody.”

If Wyatt, 36, had been convicted at trial, he would have faced up to eight years in prison.

Wyatt initially plead not guilty, claiming it was a mischaracterization of a consensual encounter.  The victim says she never consented to having sex with Wyatt, and she didn’t know of the sexual encounter until 2012, when pictures were discovered on Wyatt’s home computer she says show her being raped.

The allegations in 2012 prompted an internal affairs investigation.  Fresno chief of police, Jerry Dyer, transferred the investigation to Sheriff’s Detective Andrea McCormick, because the alleged rape happened in a county island.  According to an affidavit written by McCormick, the rape happened after the victim went out drinking with Wyatt and two of his friends.

The woman said she remembered only arriving at the bar but nothing else “due to heavy alcohol consumption,” McCormick wrote in her affidavit. The woman remembered waking up the following morning in Wyatt’s bedroom wearing sweat pants and a white T-shirt that didn’t belong to her. She then asked Wyatt to take her home.

The woman didn’t know she had been raped until Jan. 18, 2012, when she learned of photographs on Wyatt’s computer that showed her having sex with him, McCormick wrote.

The woman told the detective that the photographs showed “she is clearly passed out while the officer was having sex with her,” the affidavit said.

The woman also told the detective that she didn’t remember having sex and could not have given consent because she was extremely intoxicated, the affidavit said.

McCormick’s affidavit was in support of a warrant to search Wyatt’s home. Several computers and an iPhone were seized as evidence, the court documents said.

In her affidavit, McCormick wrote that Wyatt’s computer had 36 images of the woman, “20 of which depict the victim completely nude lying on a bed.”

Wyatt was arrested in August 2012. After being booked into jail, he was released after posting bail.

Was a consensual night of drunk sex and picture-taking mischaracterized?  Or did Officer Wyatt date rape his female colleague?  Most people would say those questions are to be answered by a jury of his peers, but the justice system works different if you’re a cop. Even if the charges aren’t related to their “duty”, they’re treated with leniency for just about anything.  Even raping other cops.