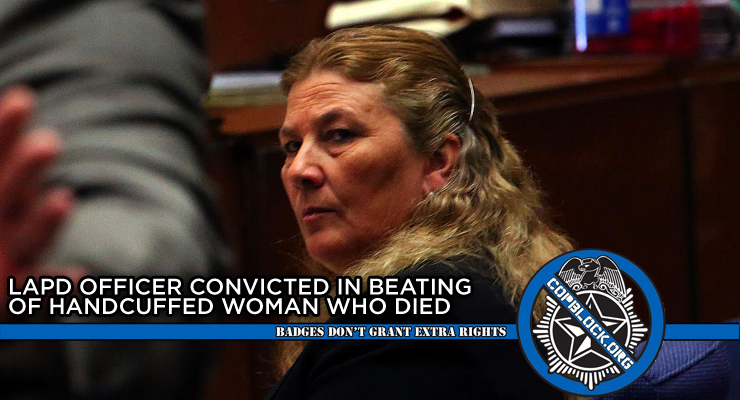 A Los Angeles police officer accessed of kicking and striking a handcuffed woman who later died, was convicted by a jury of felony assault Friday.

Officer Mary O’Callaghan had pleaded not guilty to assault under color of authority in the 2012 arrest of 35-year-old Alesia Thomas, but after two days of deliberation by jurors, a guilty verdict was reached.

Officers had went to arrest Thomas at her home after she left her two children outside a police station.

O’Callaghan had claimed Thomas resisted arrest but dash-cam footage showed to jurors showed the officer strike a handcuffed Thomas in the throat before kicking her seven times in the groin, abdomen and upper thigh, while in the back of a police cruiser, prosecutors said.

Thomas lost consciousness and was later pronounced dead at a hospital.

O’Callaghan was relieved of duty without pay following the incident and was later charged with assault. She was not charged in Thomas’ death however, after an autopsy revealed cocaine in the woman’s system.

The cause of death was listed as undetermined but the assault was not excluded as a contributing factor.

O’Callaghan is scheduled to be sentenced July 23, and faces a maximum of three years in prison.

Robert Rico, O’Callaghan’s attorney, says that he will ask for probation as a minimum judgement for the officer based on her military service and career, but also says he plans to appeal and ask for a new trial completely.

“I firmly believe the evidence presented by the prosecution did not show her force was unreasonable or unnecessary,” Rico said, adding that he felt the jury’s verdict was “based on emotion” rather than the necessary legal standard for conviction.

Thomas’ family is asking that O’Callaghan receive the maximum sentence to send a message that police brutality will not be tolerated.

LAPD Chief Charlie Beck commented on the verdict saying, “It is always disappointing when an officer fails to uphold the high standards and professionalism shown by the thousands of LAPD officers.”

Beck added that he appreciated the partnership with the district attorney’s office “to ensure that officers who operate outside of the law, and tarnish our badge, are held accountable.”