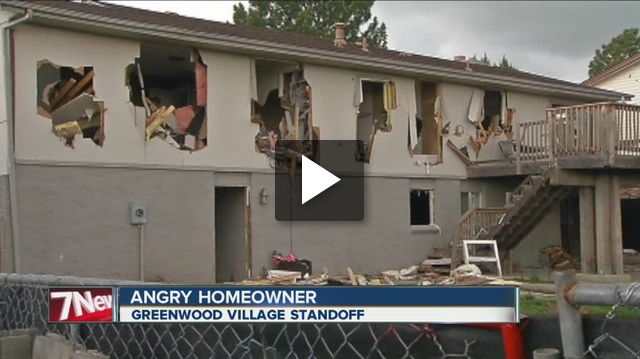 “In any civilized nation … this is the act of paramilitary thugs,” Leo Lech told the chief of the Greenwood Village Police Department. Leo Lech purchased this Greenwood Village, CO home for his son, only for it to be left completely destroyed and uninhabitable by local police who used chemical agents, flash-bang grenades, and a breaching ram to catch a man suspected of shoplifting who ran inside the home.

This all started when suspect Robert Jonathan Seacat shoplifted from a nearby Walmart and fled, then he allegedly barged into a random home and barricaded himself inside.

When the suspected shoplifter wouldn’t come out of the home, the Greenwood Village SWAT team decided to turn the scene into what neighbors say looks like that of a war zone.

“They drove their tank right through all of our fences here.” a neighbor told 7 News. “This is a paramilitary force used in a civilian environment … for one gunman? To use this kind of power?” Leo Lech told local media outlets that he is angry at police and for good reason. According to Lech, his homeowner’s insurance will cover the structure of the home but everything inside is a complete loss. Lech’s son’s family, who were living in the home at the time, are now staying elsewhere with virtually nothing left of their belongings. “They are completely distraught. They lost everything too . . . things in there that can never be replaced.”

According to Lech, the Greenwood Village Police Department claimed it was not responsible for any of the damages and they have not returned any of his calls.