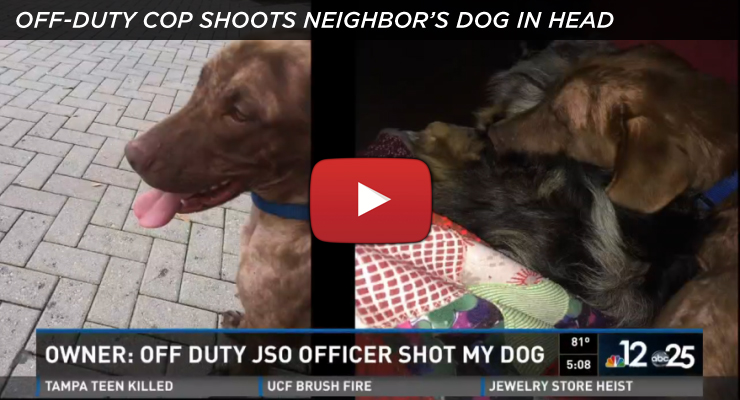 An off-duty cop in Jacksonville, FL shot and killed his neighbor’s dog on Friday after the dog entered his yard through a three-foot-wide hole in his fence. Sergeant C. Bradley Shivers shot the dog because he claimed it wouldn’t “back down” after he tried to scare it off with a rake.

From the local News 4 Jax:

According to police reports, Shivers said after the dog came in the yard it circled the pool with “an aggressive disposition,” and he grabbed a rake to try to scare the dog off. He said waving a rake at Goose had worked in the past, but this time the dog would not back down.

According to the report, Shivers told his family to jump in the pool and then ran inside and grabbed his personal Glock 27 .40-caliber firearm with JSO issued duty rounds. Shivers told police he ran back outside, grabbed the rake again and started swinging it at Goose, but he said he slipped in soft dirt, lost his balance and fell to the ground. According to the report, Shivers said Goose lunged toward him, and that’s when he fired a single shot at the dog’s head. Goose died at St. Francis Animal Hospital.

Chelsea Pavish isn’t buying the officer’s story one bit. “I don’t believe he ever tried to be aggressive. If Goose was scared, he would have run away. I think the fact that he had time to go inside and grab a gun, and the fact that he left his family in the pool while he went to get the gun just doesn’t add up.” Pavish is seeking justice for Goose, her basset-hound mix that she rescued from the city shelter just a few months before the shooting. She said that she wants the Jacksonville Sheriff’s Office to conduct an internal investigation on the incident because she does not believe her dog was threatening.

According to the report from the Sheriff’s Office, the investigation is closed and no charges were listed against Shivers.

“I haven’t even gotten so much as an apology so that would be a good start,” Pavish said.

Pavish has since launched a petition that now has over 60,000 signatures and the facebook page, Justice 4 Goose.