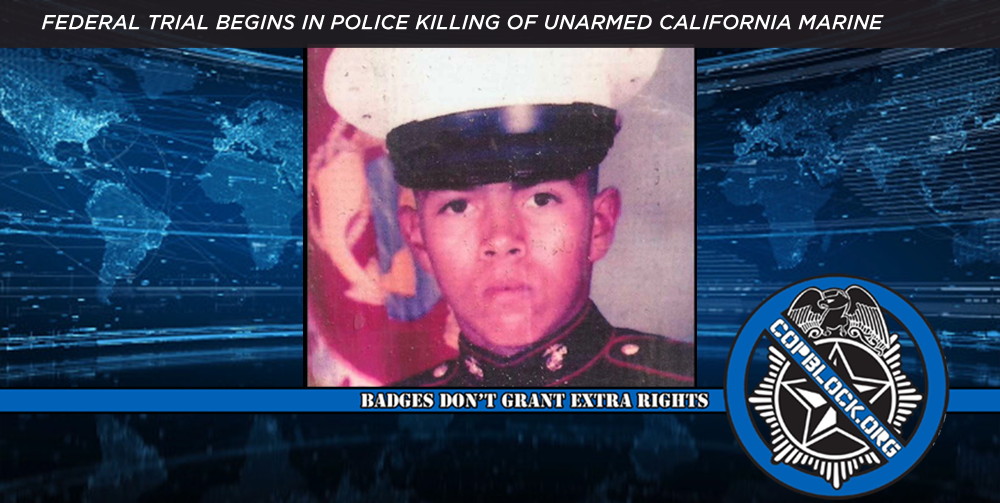 Jurors will begin hearing evidence in a federal civil rights trial beginning Tuesday that will examine a 2012 incident in which Sanger police officers shot an unarmed California Marine veteran after he called 911 expressing a death wish.

Police said they feared for their lives when they shot 46-year-old Charles “Charlie” Salinas, who had a history of alcoholism and mental illness, because he told 911 dispatchers he was armed with a 9mm handgun and two knives.

“When they get here, tell them to shoot me,” Salinas told the operator. “[But] I will not hurt anybody. Make sure that’s in the record.”

Officers say they shot Salinas after he went for something in his waistband and then lunged or charged at them, but family says officers’ accounts contradict cell-phone video recorded by a bystander.

According to court records, the video, which hasn’t been released to the pubic, shows four officers shooting Salinas as he stood unarmed in a flower bed outside a Sanger business on Academy Avenue, June 2012.

The three officers fired 22 shots without any warning, hitting Salinas 11 times, even after he hit the ground, court records say. Salinas died at the scene with a blood-alcohol level of .30.

“They mishandled the incident right from the beginning,” said former Sanger Police Chief Thomas Klose, who retired six months before Salinas was killed.

Klose maintains the officers violated department policy because they should have first communicated with Salinas and assured him that they were there to help.

“I didn’t see that in the video,” Klose said,” but if that didn’t work, the officers should have waited to see if the less-lethal beanbag shotgun blasts had an effect on the man. Our training is very specific. They should have waited, but that wasn’t done.”

According to Klose, officers are allowed to use deadly force only when their lives are threatened.

“You are allowed to fire until there is no longer a threat, Klose said, but in the case of Salinas, “they shot him in the back while he was on the ground and that’s against all training in law enforcement. You can’t justify shooting him when he’s on the ground.”

Sanger city attorney Dale Allen Jr. said police followed “correct procedure” in confronting Salinas, and when police found him in the flower bed, “[he] was provoking the officers, acting like he had a gun, and telling them to ‘Shoot me, shoot me.'”

“He made a motion coming out of the bushes while moving his hands toward a holster on his belt,” Allen said, and claimed that the video clearly shows that the officers tried to talk Salinas into surrendering.

San Diego attorney Robert Hamparyan, who represents the Salinas family, says the “holster” Allen refers to was nothing more than a cell phone holder and that the video shows “no lunging or jumping at the officers.”

“The jurors will see for themselves that Charles Salinas did not pose a threat,” Hamparyan said. “He was begging for their help.”

Hamparyan said Salinas, who had been honorably discharged from the United States Marines after serving from 1988 to 1991, was diagnosed with post traumatic stress disorder and depression and had been receiving treatment at the Veterans Administration hospital in Fresno.

Klose asserts the city should have already settled with Salinas’ family, but Hamparyan says the city has not offered to help the family in any way. “They have never acknowledged any wrongdoing,” Hamparyan said.

In the trial, which is to be held in U.S. District Court in Fresno, Salinas’ family is suing the city of Sanger for violation of civil rights, saying the officers’ use of deadly force against an unarmed and mentally distraught man was unjustified, excessive and a callous disregard for human life.

“Police are suppose to deescalate situations involving distraught individuals,” Hamparyan said. “Just because people ask police to kill them, do you grant the wish? If that’s the case, we are living in a strange time.”