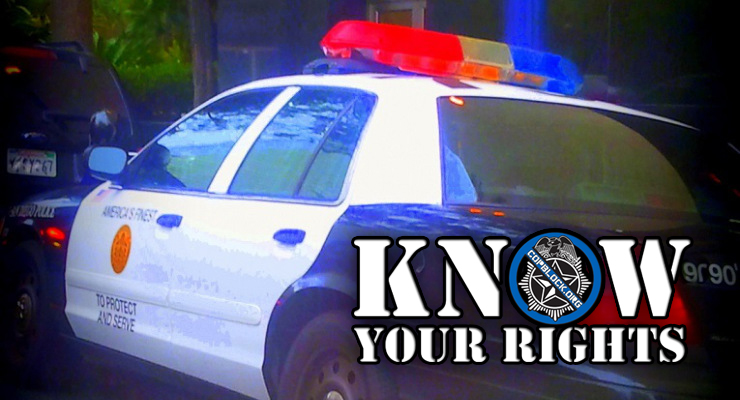 If you believe Hollywood, then you believe that a cruise liner capsized, two hillbillies from Kentucky made the Sherrif look like a fool and that everyone must be read their rights when interrogated by law enforcement.

Thanks to television and the movies, there is a good deal of misinformation about Miranda Rights and when they come into play. Can a suspect expect his case to be thrown out of court if he wasn’t read his Miranda rights during custodial interrogation?

The term “custodial” denotes the suspect is in custody and doesn’t necessarily mean in handcuffs. In the legal sense, custody means that the police have deprived the suspect of his freedom of action or movement; in other words, the suspect is not free to leave. If the suspect isn’t free to go, then he is considered in “custody.”

Miranda v. Arizona, 1966, was a momentous decision where the U.S. Supreme Court laid out canons for law enforcement officers to follow when they interrogate suspects in custody.
The rights of the accused are as follows:

When Miranda was new in the 1960s, it quickly became the obligatory scene in crime dramas. Every “You’re under arrest” was followed by, “You have the right to…” Often, at least on television, an arrest was invalidated if the cop didn’t let the perp know his rights. As a result of over-the-top Hollywood antics, much of the public has been led to believe an accused must ALWAYS be read Miranda.

The truth is different. When the law was first implemented, Miranda wasn’t required as a standard part of the arrest.  In fact, it still isn’t. An individual can be in custody without being arrested and in those situations, Miranda warnings aren’t required. However, once the person is arrested, the suspect must be informed of his rights before any questioning.  This typically happens at the law enforcement facility and not in the field, despite what popular movies continue to portray.

Tim Dees, a retired cop and now a criminal justice college professor, says, “I was a police officer for 15 years, and I believe I may have recited the Miranda caution to people three times. I never lost a case over the lack of a Miranda notice, and I think most other police officers have had the same experience.”

There are three times which the court has recognized as being acceptable exceptions to the suspect being informed of his rights.

The Miranda rule applies although there are exceptions. Law enforcement may establish that a suspect’s statement falls within one of three exceptions:

Some legal experts argue only public safety is the actual exception, while the first two can be viewed as consistent with the Miranda criteria.

For example, questions routinely asked as part of the administrative process of arrest and commitment are not considered “interrogation” under Miranda as they are not intended to produce incriminating responses.

The jailhouse informant exception applies to situations where the suspect does not know he is speaking to a state agent – either a police officer posing as an inmate or a cellmate working as an agent for the state.

The “public safety” exception to Miranda might be exemplified by the best, recent, well-known example is the Boston Marathon Bomber, Dzhokhar Tsarnaev. When he was taken into custody, Tsarnaev was not read his rights. Even when detectives questioned him hours later, Tsarnaev still had not been told his Miranda rights.

The lesson in all this?  It is vital for anyone who may have contact with law enforcement to know, and exercise, their rights.  The difference between knowledge and ignorance could be walking away free or being incarcerated for decades.