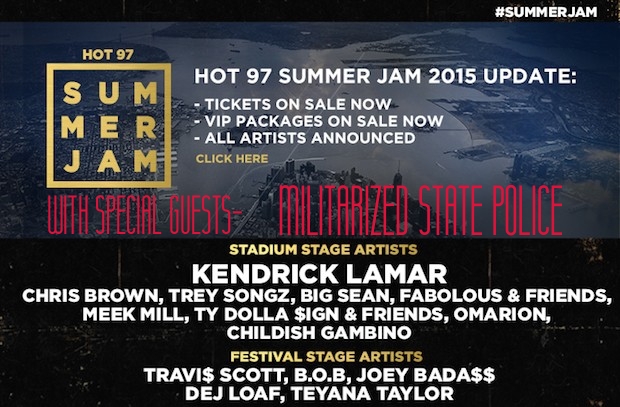 State police at the Summer Jam music festival in East Rutherford teargassed a crowd on Sunday night after attempts to enter the sold out show were answered with a militarized response.

After hearing there were no more available tickets, some concertgoers tried hopping the fence. The Met Life Stadium, where the event was being held, then called for police assistance in preventing further trespassing from the growing crowd outside the gate. I am sure they did not quite expect the response that the state police answered with.

The police (in full riot gear) first shut down the gates entirely, even though there were still paid ticket holders waiting to enter. The crowd became irate and then began to topple the metal barriers in front of the entry gates.

The police then took ‘V’ position in front of the gates, showing those gathered that they were aggressive militarized goons without more peaceable options for crowd control. The would-be festival attendees then began to throw bottles at the police in the rapidly escalating situation.

At this point an armored vehicle made its way through the crowd emitting weaponized bursts of sound at the people gathered. Shortly after, state police deployed canisters of tear gas and even maced at least one of the potential gate-crashers. The situation, which began at around 7 o’clock, ended three hours later after several arrests and dispersal of the crowd.

While it is painfully obvious that those who had not paid admission had no right to enter and attend the sold-out show, the aggressive militarized response by police in such a short time is very concerning. Not only does there seem to have been an excess of force used by the police, but their ability to organize this sort of military reaction to the situation is quite telling of how much progress the police state has made. When police are able to mobilize such a rapid and aggressive response to such a benign situation, you must wonder just how much peace they plan on keeping, versus how much disorder they are cocked and ready to unload at even the slightest of provocations.