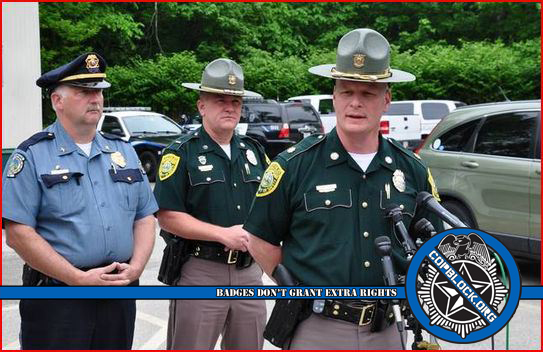 According to the Union Leader, the third-highest ranking New Hampshire State Police officer, Maj. Christopher P. Aucoin, commander of operations for state police, was arrested on May 28, 2015 and charged with a Class A misdemeanor for domestic violence, simple assault after choking his brother, Nathan Aucoin. Apparently, this is just one of several incidents over the past several weeks involving Christopher P. Aucoin that Jaffrey Police have been called to respond to. Previous incidents were “resolved at the scene without any criminal charges being brought.”

NH State Police Col. Robert Quinn has disclosed that Aucoin has been on leave for several weeks, supposedly dealing with health issues. Quinn refused to disclose whether the leave is paid or unpaid. Sources close to Aucoin have said that he has “been recently dealing with health issues, causing the stresses of his job to become more pronounced.” The Union Leader article goes on to reference various “dangerous situations” that Aucoin “was frequently called to,” as if that ought to have an impact on how his behavior is viewed.

Christopher P. Aucoin’s brother, Nathan Aucoin, was also arrested and charged with a Class A misdemeanor domestic violence, simple assault, after hitting his brother in the head with a paint can. Both men were released on $1,000 personal recognizance and will be arraigned next month in the 8th Circuit Court District Division in Jaffrey.

State Police Major Christopher P. Aucoin is paid $112,548.80 per year with taxpayer money. Is a forty-four year old man who can not settle disputes with his own brother without resorting to violence really somebody you feel is capable of protecting you and protecting your community? This grown man was arrested because he could not refrain from acting like a petulant child and violently lashing out.

Unfortunately, there is no information available as to the nature of the other several calls in regards to Aucoin’s behavior.