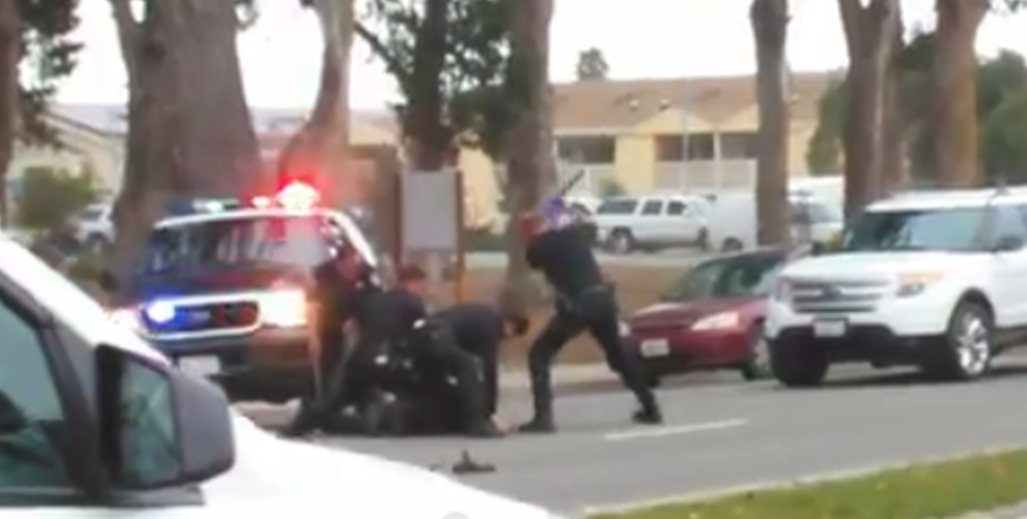 Video has emerged showing California police officers tase and beat a mentally ill man with batons as he lie in the street, Friday, after his mother called dispatch to report her son was running into traffic and acting erratically.

Salinas Police say after they arrived on the scene they spotted 28-year-old Jose Velasco attempting to push his mother into oncoming traffic and that the man resisted and then attacked officers when they attempted to pull him away.

Family members dispute that claim however. “He didn’t try to kill my mom, she walked away just fine,” sister Antoinette Ramirez said.

Video recorded by a bystander shows officers repeatedly tase and strike Velasco with batons even after the man is on the ground and restrained by other officers.

The footage shows at least three officers strike Velasco with their batons as they hold him down on the pavement.

“My poor brother, Ramirez said. “He is mentally ill and the cops had no right to keep hitting him, he was already on the floor.”

Police claim Velasco attempted to grab an officer’s Taser but the recording failed to capture the events leading up to the beating.

Police say during an ambulance ride to an area hospital for treatment, Velasco grabbed an officer and paramedic through the rails of the gurney and tried to bite them, before having to be “chemically restrained.”

After Velasco’s release from the hospital, he was charged with several felony counts and a parole violation.

An internal investigation has been launched by Salinas police to determine whether or not the officers use of force was justified.

“They used batons to subdue him,” police spokesman Spencer Critchley said. “It’s the behavior in the moment that needs to be controlled. They were using force because they judge him to be a threat [and] they hit him until he stops resisting.”